Bruce Willis is a sci-fi geek, believe it or not. It’s not simply the fact that he is starring in a science-fiction film opening September 25, Surrogates. 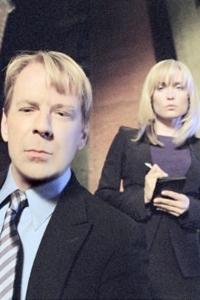 “I’ve always been a fan
of science fiction,” Willis said. “There’s also a film noir aspect to it (Surrogates) that I like. There’s also a broken romance in Surrogates that I
thought was interesting. I was fascinated by the entire idea of Surrogates.”

In the film, the idea of surrogacy begins innocently. “Surrogacy began as a creation by one of the doctors in the film, Dr Cantor,” Willis explained. “Originally it was to create robotic limbs — which is great technology. Someday, I’m sure we’ll have
that.”

But — as is the case with most science-fiction — that is where the story only begins.

“It gets to be a much more technologically advanced position. They took the idea a little too far,” Willis said.

Willis, as he enjoys doing, did many of his own stunts and found his co-stars equal to the task as well. “The whole cast did a really good job,” Willis said. The modern day action hero
is showing no signs of age with his gallivanting around the film set doubling as a stuntman.

“There was a lot of wire work flying around,” Willis admitted. “One of my favorite things to do of all the shots in the film is the where I get impacted by a car. It’s very
startling (laughs).”

There’s a murder mystery element of Surrogates as well that sends Willis’ character out into the world without his Surrogate, who he has been living vicariously through for
years. Willis’ FBI agent must solve the first homicide in a decade.

“It’s a big deal in the world of Surrogacy that anyone would choose to take an actual life,” Willis said. “But there is a group that is rebelling against Surrogacy and the
fact that everyone’s gone Surrogate crazy.”