Actor Randy Quaid (brother of Dennis Quaid) was driven by a sheriff in a small western Texas jail to get bail money from a bank. The reason? He and his wife were arrested for allegedly not paying a $10,000 hotel bill in California. 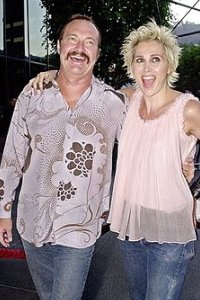 Every now and then a headline comes across
the transom that makes you go hmmmm. Randy Quaid’s latest news is certainly one of them. Randy and his wife, Evi, each posted $20,000 bail on Thursday after they each spent a few
hours in prison.

While Randy remained in custody during the quick trip to the bank, he was not handcuffed and apparently did not receive special treatment in the small town.

Here’s the scoop: in a local hotel in Santa Barbara, California, the couple had not paid a hotel bill in early September which cashed in at upwards of $10,000. A felony warrant was out on
them for burglary, defrauding an innkeeper and conspiracy.

The case was initially filed with the district attorney and detectives hadn’t spoken with Quaid yet so they were unable to release additional details.

You can guess what happened next: the couple was spotted in Texas and were promptly arrested after a deputy saw them. The sheriff noted that Evi resisted and then reportedly calmed down.

You may recall Randy won a Golden Globe award and was also nominated for an Emmy for his role of President Lyndon Johnson in LBJ: The Early Years. He’s also famous for his roles in
National Lampoon’s Vacation flicks, Independence Day and Kingpin.