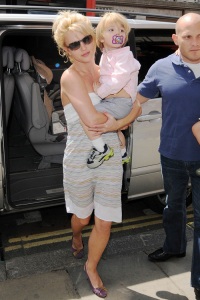 The new ruling means that they’ll still have joint custody of their boys. Apparently the order was originally set in motion to cover Spears during her Circus tour yet now it will
most likely last through the end of December.

You may recall at one point the famous entertainer lost custody of both her kids as a result of her frenetic personal life. Well, Spears
was allowed to travel with her sons during the tour as long as she makes arrangements for her ex-hubby’s lodging if he decided to join the boys.

While we don’t have more details since the order is just that – a sealed deal with tons of details – but we hear that it gives Britney at least 50-50 custody or even more at various times. K-Fed is apparently receiving $20,000 each month in child support and an additional
amount of $20,000 to $25,000 when he and the boys travel outside of their home state of California.

The judge will re-evaluate the custody arrangements in a few months but it looks like perhaps this joint custody arrangement may remain intact going forward. It will be interesting to see as Spears
is currently on tour to promote her Circus album and Federline has signed on to be a new cast member of Vh1’s hit show, Celebrity Fit Club.