By now we’ve all heard about the incestuous relationship former child actress, Mackenzie Phillips, had with her father. Stars are speaking out about it to support Mackenzie and be by her side. So, it’s no surprise that her One Day at a Time co-star, Valerie Bertinelli, is right there with her. 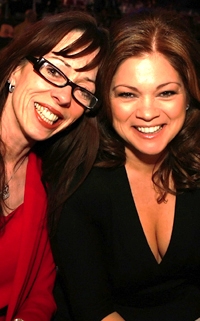 Mackenzie is doing the media whirlwind
circuit to promote her book which started with The Oprah Winfrey Show yesterday.

Sadly, her father was caught up in the whole sex, drugs and rock and roll mindset and passed that along to his daughter. By the time she was ten years old, her father taught her how to “roll
joints,” and the following year she tried cocaine from a cereal bowl.

Her drug use and abuse led to a downward spiral that led to sexual abuse as well.

She said that her father, John Phillips of the Mamas and the Papas fame, had raped her. At first it was not consensual and later it was but it came to an abrupt halt as soon as Mackenzie became
pregnant and literally didn’t know the identity of the father. The result? Her own father paid for the abortion.

As shocking as the news is to regular citizens, it must have been all the more shocking for those who were close to her and didn’t know it was going on.

Bertinelli told her on the show that she had no idea what she was going through. She continued, “I feel regret that I wasn’t there for you as
much as I could have been. I was so wrapped up in my own life and my own, you know, drama of being in my life, because I’ve dealt with substance abuse. And so I wasn’t paying attention to my
sister, and I feel bad for that.”

Khloe and Lamar getting married on Sunday!