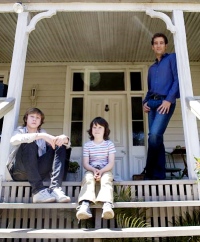 SheKnows: Did you meet with Nick (Nicholas McAnulty), the little actor playing your younger son, early to get some bonding going?

Clive Owen: Yeah. I made sure I got out to Australia nice and early. I took him out for days away from his parents, away from the film people. We went to wildlife parks. We went to
Fun Faire. We went on our own and sort of said goodbye to everybody because I knew it was hugely important that he trusted me. The film had lots of fun times and some of the times were tough and I
needed him to be able to trust me. When things were not very well (in the story) to not think ‘why is Clive acting strange?’ I needed him to always have faith that we’d always come back to the same
place. The bond between us for the film was very important. You have to believe that we’re comfortable and I’m his dad. Otherwise, you have no film.

SheKnows: He is on screen as much as you are. It must have been so important to get the right young actor for the role.

Clive Owen: Yeah. In the first meeting with (director) Scott (Hicks) I said, ‘Find a great young boy and we’ve made a huge step towards making a good film because a lot rests on
that kid’. It’s a lot to put on the shoulders of a young boy at that age. I was thrilled when I saw Nick’s tape. A lot of boys went on tape; lots of very cute, charming boys who would have been
very moving and people would have liked but he was different. He was this bundle of unpredictable (energy) and the fact that he was so young. I think, two or three years later, it would have been a
different thing. He was still in that sort of crazy, manic, obsessive phase that I think all kids are when they’re very young until they get more conscious of everything.

SheKnows: But isn’t it hard to harness that kind of little boy energy?

Clive Owen: We had to structure the film around his energy levels really because he was such a tender age (six) and in such an important part. You’d have to change ideas and change
plans some days because he’s tired or he’s not on a good day and, for a kid of that age, you can’t expect him to be. It’s a very overwhelming environment, a film set. We just knew that he would
infuse the film with real life and a sense of unpredictability and capturing that from him would really be the challenge of the film.

SheKnows: Nick and George (MacKay), who plays his teen half brother, have a great chemistry on screen as well. Did they spend some time together to bond?

Clive Owen: They did bond but George, the older boy, is such a lovely guy generally and Nick just fell in love with him and he’s so great with him and it did help the film. George
is a very, very fine actor as well. He’s a very key ingredient because of the relationship he struck up with Nick and bringing all that alive. But, also, for a guy of his age (17), he’s way mature
beyond his years. His approach, his attitude, there’s nothing accidental about what George does. There’s nothing naive. He’s very conscious. He just is a very fine actor already.

SheKnows: As a parent, how would you react if one of your girls had a party and trashed the whole house? 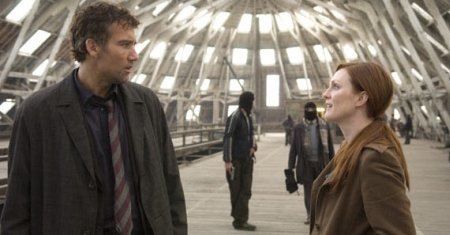 Clive Owen: Like that (in the movie)? Now that’s trashed! I’ve got all that to come. We’ll see what happens. My girls are too good to do that to me.

SheKnows: How do you think you would do raising kids alone? Could you do the laundry, could you cook? 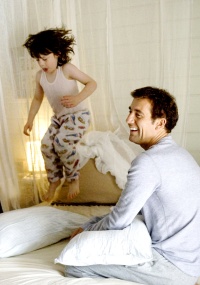 SheKnows: Would you “just say yes” to kids as your character does?

Clive Owen: I wouldn’t. But, I would do the washing up. I’ve spent many days alone with my kids. It wouldn’t phase me in the slightest really. I mean, when I have done it was only
for a number of days at a time and I’m sure I wouldn’t want to. I love having my wife around but it’s not like I’d be thrown by being alone with the girls. I spend a lot of time with them.

SheKnows: Are your housekeeping skills anything like your character Joe’s?

Clive Owen: Much better than Joe’s. I’m actually pretty good at all that.

SheKnows: Should I let your wife know that and put it in print?

Clive Owen: (laughing) But I’m not a very good cook.

SheKnows: That’s why there’s take-out. Did you read the true-life memoir on which the film is based early on or just the script?

Clive Owen: I read the script first. I loved the fact that it was terribly moving without being over-wrought. The scenes didn’t play out forever with people spitting out emotions
everywhere but I found it very, very moving; very precise really. The scenes were small. Then I read the memoir which is much more anecdotal. It floats everywhere. It’s remembering incidents. What
I got out of the memoir more than anything was that humor was going to be very important. The emotions would take care of themselves in terms of anyone’s going to find the idea of losing their wife
or mother pretty devastating and is going to be naturally moving. But, just make sure that the film is also full of the wit and the good times and not afraid to be a completely full experience.

SheKnows: There is tragedy in the film but a lot of humor as well. What scenes were the most fun for you?

Clive Owen: It was a lot of fun and it was a good set. It was a very healthy set because there were kids around. Obviously a part of the film is tough and demanded a kind of
concentration where there wasn’t much mucking around. But, other than that, it was encouraged to keep it light and energetic because it was about capturing that kind of magic. There were a lot of
scenes that weren’t really structured. We just really moved quickly. For half of the pillow fight, Nick didn’t know (the camera) was turning over (shooting). He’s in it and we’re having a good
time. Running around the house throwing water bombs, he kind of wasn’t aware of the whole thing. After his big tantrum in the car, he suddenly started eating crisps like that (indicates eating one
chip right after another), and I’m like ‘Roll. We need this’. It was fun and it was real.

Up next…Clive on his director Scott Hicks and what it was like to shoot on the beautiful landscapes of Australia.