There is nothing as sexy as a gorgeous guy who is also a great dad! Amazingly talented and ultra-handsome actor Clive Owen has taken roles opposite a stellar ensemble of leading ladies from Cate Blanchett (Elizabeth: The Golden Age) to Angelina Jolie (Beyond Borders) and Julia Roberts (Closer and Duplicity), but it’s his portrayal of a grief-stricken dad trying to raise two young sons in The Boys Are Back that perhaps showcases the actor’s most attractive qualities. 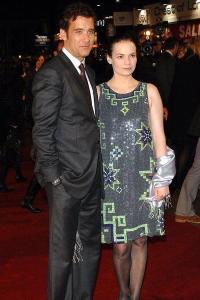 Unlike many Hollywood hunks, Clive Owen is a solid family man. He met his longtime wife Sarah-Jane Fenton while playing Romeo to her Juliet at the Royal Academy of Dramatic
Art. What’s more romantic than that? The couple, who have been married since 1995, have two daughters Hannah, 12 and Eve, 9.

Boys are Back director Scott Hicks, who helmed the popular Shine, Hearts in Atlantis and the recent rom-com No Reservations, told us why he chose Clive to play
his dad-in-distress.

“When I saw Clive in Closer (2004), I thought, ‘that’s what I want. I want someone who has that sort of stillness that is actually a mask for seething emotion because Joe is struggling to
maintain despite his grief,” Hicks said.

Owen, who has an extensive theater background, might come off as over-controlled or even controlling. Not so according to Hicks.

“What surprised me is that he was so easy-going. He’s meticulously prepared. He came absolutely ready, totally focused but ready to enjoy himself, have a good time and make sure everybody else did
too and that is a blessing. He was a sheer delight and made it fun”.

Despite dealing with family tragedy, Clive’s character Joe says clever and relatable things to his child like “Harry, did you just wipe your face with a dog?”

In a boutique hotel in West Hollywood, SheKnows met with Mr Owen, who is obviously proud of this sensitive, emotional yet funny film and especially of his young co-stars. Dressed in very dark
blue jacket and pants, crisp white shirt and cute tennis shoes, Clive was the poster boy for casual elegance. Those intense, green/gray eyes lock with his interviewer as he earnestly answers
questions… 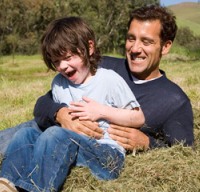 SheKnows: How personal was this film for you, being a father?

Clive Owen: Very personal in terms that parenting has always been a huge part of my life. I’ve always considered it to be very separate from making movies really. I go off and make
movies, I go home and I hang with the girls. This was the first script that really explored a big part of my life in that way and from a guy’s perspective. I was very taken with it. I thought it
was beautifully written, very accurate, very honest. It’s sort of the ups and downs of parenting.

SheKnows: Was it attractive to you that the character had two boys whereas you have two girls?

Clive Owen: Yeah. We’ve seen lots of films with a guy and a small boy or a guy and children but the equation of a teenaged boy from a previous marriage coming into it, I thought
sort of took you somewhere else. The dynamics became much more interesting. Because, you’ve got everything that (the teen) is carrying coming out to see his father. And then, he’s got to connect
with the little one. It’s a very good way to explore quite complicated relationships within a family.

SheKnows: One of the reasons you are fascinating as an actor is that your choices are brilliant and all over the place (Clive laughs). Is there any method to that madness?

Clive Owen: No. You look at it afterward and put it all together and go ‘oh my God!’. I trained in the theater and I’m sure that has something to do with it. I went in and played
lots of different parts and that was the thing that excited me the most. That’s what got me into acting. I suppose, when I do movies, the one thing that I don’t want to do is repeat myself. I want
to explore different parts of both me and what it is I do. This was just a film that ignited something in me. I’d never explored this. I was really excited at the challenge of working with boys or
younger guys because that is a challenge. I’m an actor who likes to spend time with a script and prepare properly and you have to keep it much looser when you’re working with a kid because, if you
don’t, he’ll show you up to be acting because he’s not. He’s re-acting. It’s very immediate. It’s very real and there’s something exciting about going in the same groove with him.

Up next…Clive discusses how and his onscreen sons made it work and how his own paternal real-life training was a priceless tool in his actor’s toolbox.