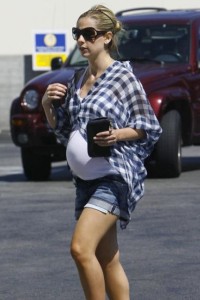 Gellar and Prinze usually try to
stay out of the spotlight and even kept quiet about the pregnancy until four months ago. That hasn’t stop fans and the media from following the romance from afar!

The Hollywood darlings met onset while shooting I Know What You Did Last Summer in 1997, but it wasn’t love at first sight. Prinze once revealed they didn’t “dig each other” at first, but
then a ride to the

Wed in 2002, they worked together again for Scooby Doo: Unmasking the Mystery and its sequel. Most recently, Gellar starred in and exec produced the HBO pilot The Wonderful
Maladys and Prinze gets serious for a stint on 24, which kicks off next January.

Gellar and Prinze continue to expand their careers, branching into writing and exec producing, but the missus is also going by a new moniker
these days. In honor of their fifth anniversary, she took her hubby’s name legally, making her Sarah Michelle Prinze.

Does this mean we’re going to have to start calling her SMP?

As Buffy The Vampire Slayer fans are no doubt aware, this isn’t the first baby girl to join the clan this year. Alyson Hannigan and hubby Alexis Denisof welcomed Satyana in March, while
David Boreanaz

Gisele and Tom Brady are expecting