From the new Eastwick and Cougar Town premieres to returning favorites The New Adventures of the Old Christine and CSI: NY — fall premieres rain on viewers. 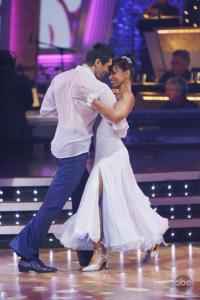 Dancing days are back

It was another huge night of television and my DVR is beginning to wheeze from the strain. Most of my evening was spent watching Dancing with the Stars.

Mya was stunning, Kelly Osbourne was unexpectedly elegant, Joanna Krupa is the first model who can dance and Macy Gray…there are no words. From her drunken dancing to her inappropriate
utterances, she’s not Dancing with the Stars material.

Two couples will be eliminated tonight, so tune in to see how that works out. Check out my full recap of Dancing with the
Stars.

Did you watch any of the new series’ that premiered last night? The Forgotten? The Good Wife? Let us know what you
thought in the comments below.

Ed O’Neill stars in Modern Family, a mockumentary-style comedy about three, very different families who are all connect to the same gene pool. O’Neill is mid-life crisis guy who is married
to a hot, young, Latin gal. His grown daughter Claire is closest to the typical suburban family with her husband and three kids. Claire’s brother Mitchell, however, lives with his gay lover and the
two of them are about to adopt a baby. It’s funny, but I’ll bet you’ll have a tear in your eye when you watch the final scenes. Modern Family is a new and different comedy about the
current concept of family. 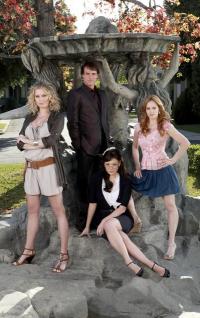 Courteney Cox stars a forty-something single mom in Cougar Town. Cox is diving back in to the dating pool. From the pitfalls of dating a guy no older than her own son, to the constant
beauty battle faced by women her age — this is a comedy many will relate to.

From three nurses to three witches, Eastwick is a magical romance loosely based on the movie The Witches of Eastwick. Rebecca Romijn, Jaime Ray Newman and Lindsay Price all
live boring lives in a small town but that all changes thanks to three coins in a fountain and the arrival of a mysterious man who promises to bring each of them to their full potential.
Eastwick is light fare for the ten o’clock slot and it’s perfect for anyone who still believes in romance and magic.

The New Adventures of Old Christine and Gary Unmarried (8:00 CBS)

Two of CBS’s top comedies are back tonight. First up is Julia Louis-Dreyfus as a single mom who’s trying to have it all on The New Adventures of Old Christine. 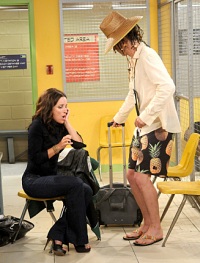 hen Jay Mohr is back as
the single father who’s trying to have it all. What a perfect match. Blind date, anyone?

Hotch is missing and there’s a killer targeting an emergency room doctor. Think one thing could have something to do with the other? It’s the tense fifth season opener of
Criminal Minds.

Prison Break’s Wentworth Miller guests as a loose cannon cop who is called in to help on a rape case a move that worries Elliott and Olivia. Christine Lahti joins the cast as Executive ADA Sonya
Paxton.

It ended in a hail of gunfire, now, one member’s life will be changed forever. Join the CSI:NY team as they being their sixth season hunting down the shooter. This time,
it’s very personal. Sarah Carter returns as crime scene tech Haylen Becall.

There are also new episodes of America’s Next Top Model and The Beautiful Life on The CW
and So You Think You Can Dance and Glee on Fox.

Check out the SheKnows readers’ discussion on Glee!