It was Dancing with the Stars ladies night in the ballroom as the female celebs took the floor and the men got to sit this dance out. There were some pleasant surprises and one Cloris Leachman moment that left everyone either laughing or stunned. Like the men before them, the ladies had to perform a Salsa or Viennese Waltz (one Latin, one Ballroom) then compete in the opposite style of dance in the relay. 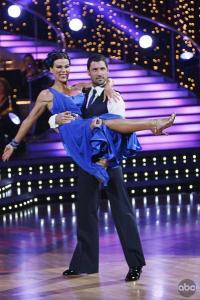 Dancing with the Stars began with chatty actress Debi
Mazar and her less than tolerant partner Maksim Chmerkovskiy. They make
a cute couple and their Salsa was full of personality and energy. It wasn’t the best performance of the night but she’s got real potential.

Melissa Joan Hart and Mark Ballas took the floor next for a magical Viennese Waltz to Time of My Life. This is another great pairing as he has that innocent, gentlemanly quality that goes
with her sweet, girlish charm. The dance was enjoyable but Melissa has to relax and learn to extend her body. I like these two, a lot.

The best dance of the night goes to Mya and Dmitry and their Viennese Waltz to Vision of Love. She simply floated across the dance floor. Gorgeous lines, beautiful smile, they made it look
effortless. They’re the front-runners for sure.

Kathy Ireland is another model who can’t dance but I’m pulling for her and Tony Dovolani. Tony has had a few tough partners in his time on
the show and I’m afraid he won’t be long for the competition with Kathy in tow. She’s trying hard but she doesn’t seem to have any natural gifts and that’s gotta hurt.

Olympic swimmer Natalie Coughlin is dancing with Alex Mazo. They did a Salsa to a perky tune with a Latin beat and it was cute. She had a few moments where she got lost on the dance floor but
overall it was one of the best performances of the night. Traditionally, athletes do very well on this show so she’s off to a fine start. 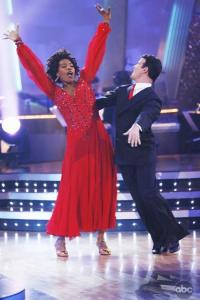 Then there was Macy Gray. Oh my. I feel for her poor partner, Jonathan Roberts. First off, she looks drunk or stoned every time you see her on camera. She can’t even walk down the stairs in the
opening without her head lolling to the side.

Her rehearsal package emphasized the fact that she was on a European tour all last week so they had to practice backstage at the concert halls. But let’s face it; practice time is not this girl’s
problem. She dances like a hippie on acid and while it’s memorizing, it’s not worthy of staying on another week.

To top it off, she gave the censors a heart attack by uttering a slang term for having lost her virginity, which sent the entire ballroom into a tizzy. Carrie Ann was laughing so hard she could
barely announce her score while Bruno and some of the other dancers were caught opened mouthed for a few seconds.

Enough already — I say drop the hammer on her tonight.

Ironically, it was Joanna Krupa and her partner Derek Hough that brought order to the chaos. There’s no doubt in my mind that Joanna was cast on the show with the hope that she would fly off the
handle as she did on her summer reality show The Superstars. No such luck, ABC. She turned in a stellar Salsa. She and
Derek look great together and I think they’re going to be a force in this competition. 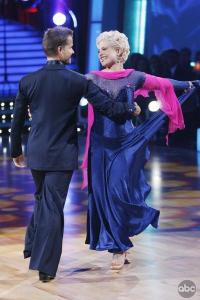 One of the most poignant moments of the night came when Kelly Osbourne took the floor with her partner Louis Van Amstel. The wild child of Ozzy and Sharon, was unexpectedly elegant as she performed
her Viennese Waltz to the song Trouble. She was so pleased with herself at the end that she ran over and hugged her dad while Sharon was crying such tears of joy she could hardly face the
cameras. Kudos to her and I hope she stays around awhile.

Last up were the relay dances. First was a Foxtrot to The Best is Yet to Come. The rankings on this one were pretty easy to figure. Kathy in fourth, Debi in third (she’s a little out of
control), Natalie second and Joanna on top.

The Cha Cha relay to Centerfold, wasn’t quite as put together. Predictably, Macy came in fourth, Melissa third, Kelly second and of course, Mya took first.

That’s it. The first round is over and tonight one guy and one girl is going home. If the audience voted properly Ashley Hamilton or Tom Delay should be headed home as well as Macy Gray for the
girls.

Sean Kingston will perform tonight and the pro dancers have a special tribute to Patrick Swayze that shouldn’t be missed.

That’s tonight, Dancing with the Stars starting at 8:00 on ABC.

Dancing with the Stars: Derek Hough and Joanna Krupa are
dating

Dancing with the Stars cast breakdown

Patrick Swayze scheduled for tonight’s Dancing with the Stars