Fame arrives in theaters September 25 with the biggest question about the remake surrounding its theme song. Legendary and Oscar-winning, Fame as sung by Irene Cara became a sensation almost 30 years ago. 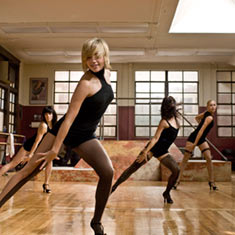 With Fame’s premiere in
Hollywood tonight, SheKnows is presenting the music video for the eagerly expected film’s theme song that gets a hip-hop makeover.

The Fame music video debuted during the 2009 MTV Video Awards and illustrated how this film that captured the imagination of a generation has found a way to become relevant in 2009.

Fame: what’s it about?

A reinvention of the original Oscar-winning hit film packed with explosive music and dance, Fame follows a talented group of dancers, singers, actors and artists over four years at the New
York City High School of Performing Arts.

A school that produces diverse, creative powerhouses where students from all walks of life are given a chance to live out their dreams and achieve real and lasting fame…the kind that comes
only from talent, dedication, and hard work.

In an incredibly competitive atmosphere, each student’s passion will be put to the test. As they strive for their moment in the spotlight, mentored by the best — and toughest — teachers,
they’ll discover who among them has the innate skills and necessary dedication to succeed. With the love and support of their friends and fellow artists, they’ll find out who amongst
them has what it takes to achieve Fame.