Reality star Khloe Kardashian and Laker forward Lamar Odom announced their engagement this Monday, less than a month after they started dating; and now, they’re set to tie the knot this Sunday! Talk about a whirlwind affair. 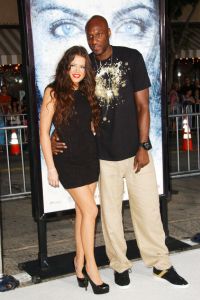 “We saw each other out all the time
and I always thought he was cute LOL but Halo was the first time we really hung out,” Khloe blogged to fans on September 14. “We had so
much fun together, just like we always do!”

Word is there’s no baby on the way to hurry things along. Odom just wanted to seal the deal before the rigors of Lakers training starts.

Whatever the reason for the shotgun effect, plans are coming together quickly. Phone invites have gone out and the swank 200-plus guest affair will take place in Bel Air, at the home music mogul
Irving Azoff.

There’s been much speculation about a prenup, as well. Kardashian is an earner, having done well with her reality shows Keeping Up with the Kardashians and Kourtney and Khloe Take Miami, not to mention her clothing store Dash. She’s also continued to expand her brand, like the rest of the
Kardashian crew, but Odom will likely look to protect his $33 million contract with the Lakers.

Most fans who follow the Kardashian sisters would not have pegged Khloe to be the first to walk down the aisle. A pregnant Kourtney is
reportedly anxious to take the walk with baby daddy Scott Disick before their bundle of joy arrives this December and many expected Kim to marry long time boyfriend and NFL star Reggie Bush, but
then the couple broke up in July.

Khloe’s sisters also spent a few episodes of Keeping Up trying to get her into the dating world. The 20 pounds she’s dropped may have helped get her out there, but we’ll assume that’s just
a confidence thing!