The Good Wife makes a go of it on CBS while Christian Slater gives TV another go with the premiere of The Forgotten. 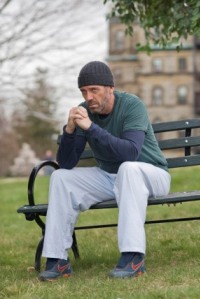 Have you recovered from last night’s
new TV lollapalooza yet? I hope so because there’s more coming your way over the next couple of days. Before we look at that, let’s look at last night.

Heroes returned with a creepy carnival theme but even his Magic Compass couldn’t lead the series to a ratings win. It was another
single “h” word that stole that night — House! Hugh Laurie wow’d the critics and the fans last night with both snark and poignant drama.

I was excited to see Danneel Harris return as Rachel on One Tree Hill, but married to Dan Scott? What’s that all about and is this guy seriously looking for redemption?

On the comedy side, The Big Bang Theory was loaded with laughs for a geek like me (they missed Comic Con!) but what did you think of the new show Accidentally on Purpose? Castle’s still on the DVR, so don’t spoil that one for me, because most of my night was spent on
Dancing with the Stars. Tonight, the
female stars of the dance will take the floor and that begins at 8:00 on ABC. 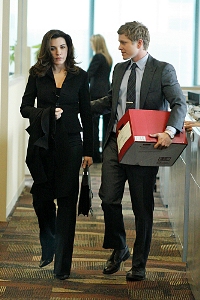 NCIS begins its seventh season tonight when Gibbs puts Tony in charge of finding Ziva’s replacement. Ouch, that’s gotta hurt. Then it’s the series premiere of NCIS: Los Angeles
which ramps up the action and leaves the autopsies behind.

Chris O’Donnell and LL Cool J are agents in the Office of Special Projects, a division of NCIS that deals with criminals who are a threat to national security.

Julianna Margulies stars as wife and mother who suddenly lands in the middle of a public sex and political corruption scandal thanks to the
indiscretions of her husband played by Chris Noth.

Determined to get a handle on her own life, she returns to work as a lawyer but since she’s been out of the courtroom for so long, she has to come in as a junior associate, working along side
actual juniors such as Gilmore Girls’ Matt Czuchry. Part legal drama, part family drama, it looks like Margulies has a winner on her hands.

Christian Slater stars in this poignant crime drama with an amateur twist. The Forgotten Network is a group of civilians who work to help identify murder victims in hopes that it will
bring closure and help find the murderer. Moody, compelling, this one’s tough to watch, but only because it’s so emotional and real. A dark horse in this new season in more ways than one.

Dancing with the Stars: the men