President Obama opened up about the family on David Letterman!

David Letterman got laughs with his Top Ten Reasons President Obama Agreed to Appear on the Late Show, but we all know why the Prez made an appearance last night: He has been working the
airwaves for support on his health care overhaul. While he got to his agenda, however, this was a decidedly more personal interview that we’ve seen of late. 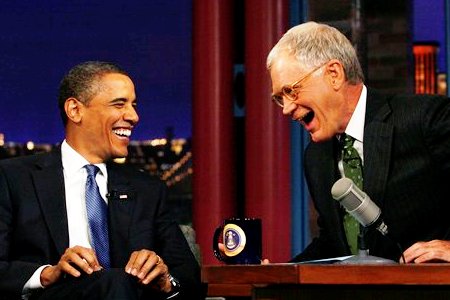 Before Obama and Letterman even got started, the president was joking around with an audience member about her heart-shaped potato and
while he’s regularly mum about his personal life, especially where his daughters are concerned, nothing seemed off limit.

The President opened up about his girls changing schools and date night with the missus, but most interesting to many viewers was the chatter about his kids. So far, his girls have been able to
lead relatively normal lives, with sleepovers, beach days and for Sasha, even homework.

Obama explained they’re still too young to be impressed or overly affected by his position, but was quick to acknowledge that the teen
years could pose some trouble.

“I suppose they’ll want to go out on dates, and I’ll have all these men with guns surrounding them,” he quipped. “At that point, they may have a little stress.”

And his zingers weren’t saved for family chatter. When Letterman empathized with Obama’s dizzying itinerary and asked if The Late Show was a nice break in the grind, Obama was quick with
the tease, saying “That was unexpected, seeing that appear on the schedule. That’s one of those where you ask your advisers, ‘Who is responsible for this?’ and everyone looks down (at) their
blackberries.”

Letterman took things serious when he asked Obama if the recent lack of decorum in Washington was rooted in racism, as suggested by Jimmy
Carter, but Obama again kept it light, deadpanning, “First of all, it’s important to realize I was actually black before the election.”

After the crowd’s laughter subsided, Obama went on to answer honestly, as well, and from there, it was all about the politics. The president talked everything, including hot topics like health
care, the state of the economy and Afghanistan, and then finally revealed the real reason he’d come on Letterman: To counteract the misinformation he’s been fighting in DC.

There was much discussion of where the president sees America going, not to mention how we got here to begin with, but the Late Show clips circling the net this morning are all about Obama’s
personal life. One has to wonder how many viewers heard more than that.

Khloe Kardashian’s getting married to a Los Angeles Laker