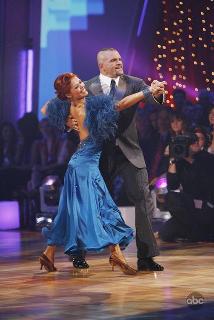 Last night on DWTS it was all about the male celebs and I don’t
think we have as much talent here as we had at the start of last season. There were some surprises in the bunch, both good and bad. To make it even more difficult they all had to perform either a
Foxtrot or Cha Cha, then compete in a relay dance in the opposite ballroom style at the end of the night.

Right now, Donny Osmond is the clear front-runner but there’s a long road ahead of all of them and we’ve yet to see the girls dance.

Let’s take a closer look at the guys.

First up was teen pop sensation Aaron Carter and Karina Smirnoff. They make a good pair. They did a Cha Cha to Beggin’ and it’s a good start. He’s a stiff and he slipped on the final move,
dropping Karina a little but he’s got real potential. They end up with the best score of the night.

Next is UFC fighter Chuck Liddell who is very well known around my house thanks to my MMA-training son. He’s paired with Anna Trebunskaya and I they are also a good match. He did better than
everyone expected with his Foxtrot to That’s Life. He really put his heart into it and though he looked a little uncomfortable, he tried to remember to smile and the audience got behind
him. A for effort and her costume was gorgeous.

One of my favorites, Mark Dacascos was up next on the Dancing with the Stars stage. He’s a
well-trained martial artist who is used to working with a choreographer on stunts.

One person who knows Mark’s abilities very well is Stargate Atlantis stunt coordinator James Bamford and he had this to say, “Mark is a multi-talented individual with the ability to pick
up any new movement. He will rehearse until he gets it. Some people will need to take a break and come back but not him. He’ll do the repetition and keep on going. I think he’ll surprise everyone
and do very well.”

Mark is teamed up with Lacey Schwimmer, another good combo since she’s known for going outside the box. For their Cha Cha she leaned on Mark’s martial arts training for a bit of Kung Fu
Fighting. The dance was a real crowd pleasers (didn’t please Len) and it’s easy to see that Mark has potential. I can’t wait to see more of him on the floor.

The first real train wreck of the night was unexpectedly Ashley Hamilton. He’s tall, he’s lean, he’s classically handsome and he has no rhythm and no charisma on stage. He and Edyta Siliwinska
danced a Foxtrot. It was painful to watch. He was stiff and awkward and the song didn’t help. The only points he gets from me is for the story he told about an accident that left him in need of
brain surgery and months in a wheelchair. Given that, it’s amazing that he’s even competing, but I don’t see him sticking around for very long.

On the opposite end of the spectrum we have Donny Osmond and Kym Johnson doing a Foxtrot to All That Jazz. Donny knows how to sell a performance and he captivated the audience with his
style. No, his technique wasn’t perfect but who cares? They were a joy to watch. They came in near the top for the evening despite Len’s complaints about too much razzamatazz! 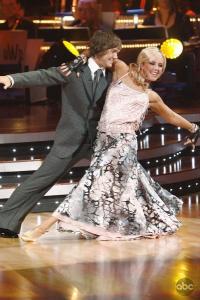 Sweet Louie Vito the snowboard champ hit the stage with
Chelsie Hightower performing a Foxtrot to It’s My Life. This is another perfect pairing because Louie is very short and very young and very shaggy, so Chelsie or Lacey would be have the
best partners for him. His smile is infectious and he seems to have some natural ability so he may stick around for a while.

Woo woo — that’s the sound of another train heading into trouble and Michael Irvin is riding in the cab. The football star is partnered with pro dance competition winner Anna Demidova and that’s
bad news for him. He is not naturally gifted and she doesn’t know how to get the best out of him. Their Cha Cha to I Feel Good is awkward and it’s lacking in content. It looks more like a
Super Bowl victory dance than a ballroom number. They get the lowest score of the night.

Squeaking by on grandfatherly charm was politician Tom DeLay. He lucked out with Cheryl Burke as a partner, but she won’t be taking home the win this season. She gets him loose with a silly Cha Cha
to Wild Thing and I give him credit for going all out. He’s not a dancer and he’ll never pull off the sexy Latin numbers. He could go home this week even though Ashley Hamilton was much
worse.

Then it was time for the relay number which has each of the four pairs dancing for 30 second to the same piece of music to create one sequential dance. Chuck, Donny, Louie and Ashley went head to
head on a salsa number that only cemented Donny’s dominance. Louis came in second, Chuck third and since there was nothing lower than fourth, that’s where Ashley landed. 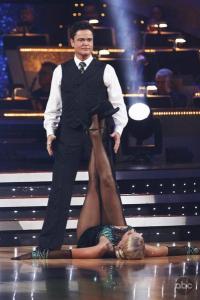 The waltz was a tighter race with Aaron
taking the top spot, Mark right below that, Michael in third and Tom at the bottom.

How cool is that trick camera they used to capture everyone’s movement in midair?

What was up with Macy Gray and Kellie Osbourne in the opening? Macy looked drunk and Kellie looked like she was going to be sick. Not a good start when all they had to do tonight was sit on the
sidelines.

How awesome was the opening dance number with the male pros showing off to The Boys Are Back in Town?

And how odd was Carrie Ann’s hair?

Tonight we’re back in the ballroom with the female celebs and then one guy and one girl will be sent home on Wednesday.

I’m excited that Dancing with the Stars is back. Are you?

More Dancing with the Stars

Dancing with the Stars: breaking down this year’s cast

Dancing with the Stars Maks is moving on

Reality TV Magazine’s report from Dancing with the Stars
premiere