The Good Wife star Julianna Margulies shares insight into her electric return to television. Political sex scandals are about as American as apple pie and when those scandals break, The Good Wife is always there — standing by her unfaithful husband as he takes the podium to apologize. 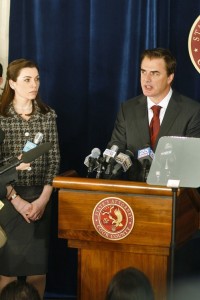 Julianna Margulies returns to television to explore that choice, not to mention what comes after it, in her new series premiering September 22.

“I was so quick to judge all those women I saw standing by their man,” Julianna Margulies said to SheKnows. “It’s not like these are silly little wallflowers that are waiting for their husband to
come home. Most of them have two degrees, at least, and they’re incredibly accomplished, so I kept thinking, ‘Well, why are you standing there?'”

Her curiosity led her to jump at the role of Alicia, a woman who stands by her man Peter (Chris Noth), only to have him imprisoned. Left to
fend for herself and their two teenagers, The Good Wife heads back to work as a defense attorney, while trying to determine the future of her marriage.

“I loved how complicated she is,” Margulies raved of her character. “This is a woman who’s thought her life was going one way for many years and trusted that life – And then everything crumbles.
We’re going to be able to peel her like an onion for years to come, because how do you react?”

The scandal, too, will be peeled back and examined, calling into question just who is “bad” or “good” in this story, or if those labels even apply. 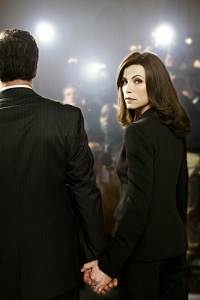 “We’re all so quick to judge
these people without knowing the facts,” Margulies reflected. “We all assume he’s a bad man and she’s a good woman, (but) we don’t know what’s
going on in the bedroom or at home. We don’t know what their deal is or what they’ve been going through in their own marriage. Life shifts and changes and it’s a great way to explore human nature.”

Margulies: order in the court!

The scandal sets the stage, staying with Alicia as she leaves behind the dutiful role of The Good Wife to find her footing in the courtroom. Instead of escaping politics, however, she
finds herself embroiled in a whole new game.

“One of the important things (we look at) is how people in an office try to get above each other, so it won’t always be necessarily about the case,” King previewed. “What’s interesting to us is how
Alicia comes in as a junior associate, really at the bottom of the totem pole.”

Alicia’s law school pal, Will (Josh Charles), sits squarely at the other end of the pole. As a partner at her new firm, he’s curious to see how she’ll holds up against the 20-somethings clawing
their way up and whether she still has what it takes in the courtroom. 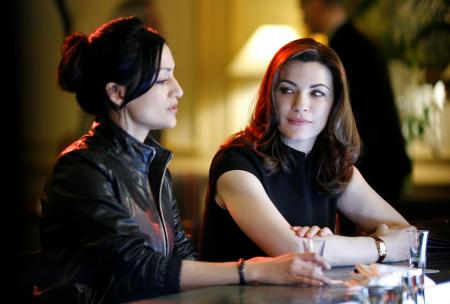 “She graduated top in her class at Georgetown University 15 years prior to this and never got to hone in on her skills, so it’s a great way for her to discover who she is as a woman,” Margulies
said. “Law is a man’s world and she’s coming out of this cocoon. It’s a great backdrop for her development.

The firm’s top litigator Diane Lockheart (Christine Baranski) welcomes her to the boys club, but Alicia may find the support she needs from an unlikely and combative ally, hotshot investigator
Kalinda (Archie Panjabi). 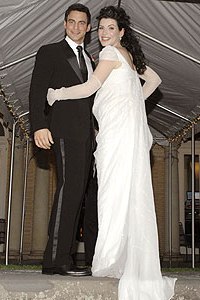 “These are two
friends who argue constantly about both the strategy of a case (and their differences),” King said. “Kalinda is much more private and holds all her cards very close to the vest, but Alicia
finds her life spilled across the front page, so she has to be upfront. It’s a good dynamic that keeps growing in an interesting direction, and it’s complicated by the fact that Kalinda used to
work for Alicia’s husband. They’re going to be really flinty.”

“Kalinda’s very judgmental in the beginning,” Margulies added. “She says, ‘I would have stuck a knife in his heart!’ She judges Alicia to be a weak woman.”

SheKnows hope’s Kalinda’s wrong, because it’s going to take a strong woman to survive the road ahead.

The Good Wife kicks off September 22 on CBS.