Courtney Love was caught with her pants — or more accurately, her skirt — down when an unwitting partygoer walked in on a most private moment. 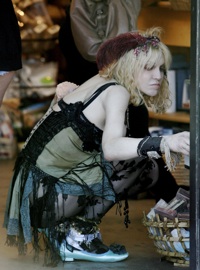 Pharmacist Sebastian Karnaby was trying to leave a
party at the Standard Hotel in NYC when he accidentally opened the wrong door. The very, very wrong door.

What Karnaby thought was an exit was actually the door to the bathroom, and instead of the sidewalk he found Courtney sitting on the toilet with her skirt around her ankles. And that sight, dear
friends, is worthy of being condemned by the UN as an inhumane torture technique.

Karnaby said Courtney was actually using the toilet for its true purpose and not as a handy stand for drugs, and she became enraged at the
interruption — despite the fact that she was the one who did not lock the door.

“She stormed out screaming, ‘I am going to get you thrown out!’ She jumped on me, went crazy and dragged me over to security by the arm and claimed that I’d attacked her,” Karnaby explained. “They
were trying to calm her down, but she was out of control. She was like a possessed woman. I absolutely did not attack her — I was trying to get away. Thankfully, she’d remembered to pull up her
skirt. I never wanted to see Courtney Love on the toilet. It wasn’t a pretty sight. I just wanted to get out of there.”

You can be sure Courtney didn’t wash her hands before attacking the pharmacist.

All Karnaby had to do was tell Courtney he has access to the good stuff and she would have turned into a purring cuddly kitten in his arms.