The Today Show always excels at snatching news-grabbing talent. Their casting of Jenna Bush Hager as a Today Show correspondent is pure brilliance. 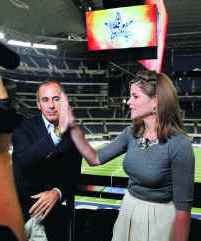 Alongside host Matt Lauer, Bush was
completely at ease and will be a nice addition to The Today Show family. Of particular joy is watching her in her native Texas covering the beloved Dallas Cowboys. The hallowed ground for
Texas football fans was handled with professional grace from the former President’s daughter.

When Jenna made her Today Show debut Thursday, her mother and grandmother both joined her to show their support.

After teasing her segment that was upcoming, Bush was overheard saying, “It was great seeing this incredible new stadium standing right next to the ballpark where I spent a lot of time as a
kid,” Bush Hager said. After Bush’s bit was recorded, The Today Show host was impressed.

Matt Lauer reached over and gave Jenna a high-five.

Bush Hager was making a triumphant return as a major-network correspondent to a Dallas, Texas community that is clearly close to her heart.

Bush Hager has said that the crux of her Today Show coverage, she hopes, will be education-focused. As she is her former First Lady’s daughter, her passion is the educating of
America’s citizens. Not to many people see their dreams come true as Jenna has with her reporting gig and we at SheKnows wish her the best in her latest endeavor.

There is one glaring plus to Bush’s Dallas reporting introduction she gets to stay at home and visit with her parents, who live nearby.

“I couldn’t come into town and not stay with them,” Bush Hager reported.