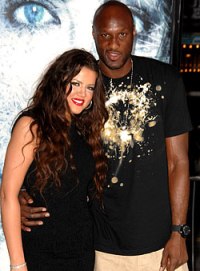 After about a month of dating, Khloe is getting married in a whirlwind romance, by even Hollywood standards. This, of course, is
in the shadow of her sister and Kourtney and Khloe Take Miami co-star Kourtney’s pregnancy news.

After leading the Los Angeles Lakers to a world championship in June, Odom signed a $30-plus million contract with the team. Kardashian has solidified her place in Los Angeles lore by becoming a
Mrs Laker. Previous title holders of this esteem laud include Ugly Betty’s Vanessa Williams who was married to Rick Fox.

Khloe and Kourtney have shot out of their sister Kim’s shadow that was left pretty large after the success of Keeping UP with the Kardashians. Watching the pair do their Miami thing has been
one of the sweet surprises of the season.

As fast as Khloe and Lamar’s love affair took root, so has the rekindled-from-the-pregnancy-relationship of Khloe’s sister Kourtney and Florida financier, Scott Disick.

Perhaps before long, Khloe will be adding another little one to the Kardashian clan.

Read on for more Kardashian news