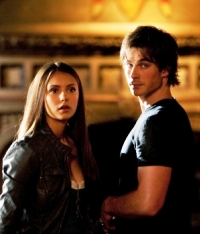 I have a secret. Come closer so I
can whisper. Don’t tell my husband, but I spent Thursday night with two pairs of hot brothers. It was Stefan and Damon vs Sam and Dean (hmm…I’m sensing a theme) each living life on the
opposite end of the paranormal spectrum.

Stefan (Paul Wesley) and Damon (Ian Somerhalder) are blood-sucking brothers in The CW’s new series The Vampire Diaries. While Supernatural’s Sam (Jared Padalecki) and Dean (Jensen
Ackles) hunt those kinds of creatures for a living. Last night, though, there wasn’t a lot of brotherly love going around between them as Damon tried to get Stefan to own up to his addiction to
blood, while Dean wanted Sam to kick his blood habit. Such synergy, and the four of them are pretty easy on the eyes, too.

Stepping back into reality, Project Runway had an interesting show last night.
The designers had to make a garment out of newspaper ala the paper dresses that were all the rage in the sixties. I expected most of them to be a disaster but overall they turned out some amazing
works of art. The big story was Johnny and his tale of woe. We saw Johnny scrap his first dress after Tim Gunn said it looked like birds had attacked it. But on camera, to his model and to the
judges, Johnny said that the original dress was ruined when he tried to iron it and the steamer spit water all over the paper.

Several of his teammates called him on the lie and even mentioned it to the judges, so did it happen? Was the show edited in a way to make him look like he lied? Surely, if he had ruined the dress
it would have been caught on camera and knowing you do have cameras watching your every move, why lie? Liar or not, he was eliminated for not putting enough effort into his work.

It’s a quite night for new TV but it’s the calm before the storm as next week we have more than thirty season premieres including Dancing with the Stars, Eastwick, Flash Forward and the return of Grey’s Anatomy. 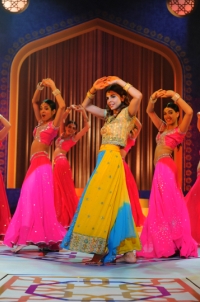 First, on Monk, I
know critics can be cruel but did the one who panned Natalie’s daughter’s performance also commit murder? Then, in Bollywood Homocide, a man asks Shawn and Gus to help him end a curse that
endangers every one of his girlfriends on Psych.

It’s a full night of new episodes beginning with Making Over America where a marine biologist gets a trendy new look. Next it’s two new episodes of Say Yes to the Dress and it
ends with Masters of Reception where a bridezilla makes life difficult for the crew.

Neil Patrick Harris hosts this yearly salute to the best and brightest in the TV industry. Sarah McLachlan will perform as will Dancing with the Stars duo Maks and Karina.
It should be an exciting and glamorous night. Wonder how Maks and Karina will do now that they’re splitsville?