Cloudy with a Chance of Meatballs star Anna Faris began performing at nine-years-old. Faris was drawn to acting because of its ability to make a tiny person feel enormous. “I was a really short child,” Faris admitted exclusively to SheKnows from a suite at the Four Seasons Beverly Hills.

Faris is starring in Cloudy with a Chance of Meatballs, in theaters September 18, an animated spectacle based on the beloved children’s book by Judi and Ron Barrett. 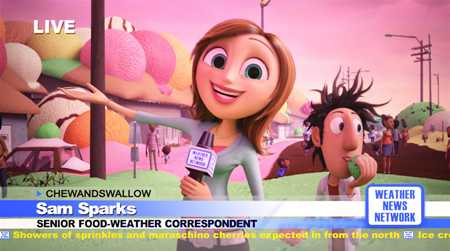 Meatballs also stars SNL’s Bill Hader as an inventor who seeks to create a device that turns water into food for his island-town that is surviving only on sardines. Faris’ weather reporter arrives on the island for another story and explosively becomes part of the food falling from the sky story.

Faris is widely known for her priceless comic timing in the Scary Movie films, The House Bunny and starring opposite some of Hollywood’s hottest funnymen including Ryan Reynolds in Just Friends and Seth Rogan in April’s Observe and Report.

The Cloudy with a Chance of Meatball star recently wed sweetheart Chris Pratt July 9 and with her star ever-rising, the forecast for Faris is blindingly sunny. 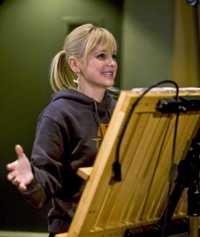 SheKnows: First of all, congratulations on your wedding.

SheKnows: When actors discover they want to act very young as you did, what was it about performing that first appealed to you?

Anna Faris: When I was six, my mom enrolled me in an acting class. I loved it. Most kids were into swimming or soccer and I just loved acting. There never was any pressure to do it. See, I was really short! It was my identity that I was the short girl. I think out of that I needed to find a way to express myself. Also, in many ways too I was terrible at public speaking — but, through escaping in a character…

SheKnows: …that gave you more confidence to do it.

Anna Faris: Totally! Plus, I worked with adult actors. That was really big for me to be surrounded by adults hearing them complain about, I don’t know, adult things (laughs). It was really fun for me. I didn’t have too many friends. I really cherish those memories.

SheKnows: You have the most impeccable comic timing…

SheKnows: You do, like a Lucile Ball for the modern era.

Anna Faris: That is so nice of you…

SheKnows: Now in Cloudy with a Chance of Meatballs, how was it difficult to perform in your usual manner without having the benefit of utilizing your physical frame?

Anna Faris: It was hard. My character isn’t really that funny in this one. I wanted to make her frustrated. The voice acting job is so much harder. It was so difficult. I’d come home every night exhausted. I figured, it’s a voice-over gig, it’ll be easy. I would do another one in a minute, but I would go into it knowing it’s difficult. It’s work.

SheKnows: Did I see you are in the Chipmunks Squeakquel?

Anna Faris: I laugh every time I see it. I don’t know what I’m going to do at the junket for that one.

SheKnows: Are you live action or animated on that?

SheKnows: The best Chipettes ever!

SheKnows: Was the Squeakquel challenging, but in a different way than Cloudy with a Chance of Meatballs?

Anna Faris: Yes! Because you have to record your voice really slow because they speed it up. (Slowly) You have to be very persistent in your speech. You have to say everything more slowly, but at the same time you have to be in a character that is hyper. It is very difficult. What I’ve seen so far looks incredible and witty too.

Up next…Anna shares insight into her experience with Sophia Coppola and Ang Lee!