Jessica Simpson is a sad, sad lady tonight — and for once it has nothing to do with her love life. 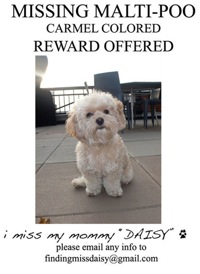 That love affair came to a horrifying end when Jessica witnessed a dognapping of the worst kind: Daisy was snatched by a coyote!

“My heart is broken because a coyote took my precious Daisy right in front of our eyes. HORROR! We are searching. Hoping. Please help!”

Say what you want about the bubble-headed blonde, but that’s just awful.

Jess quickly hired a dog-finding firm called FindToto.com in the slim hopes of finding Daisy alive and well, because, she says, Daisy is “fast” and could have seized an opportunity to make a quick
getaway from her carnivorous captor. Among other tactics, the firm power-dials 1,000 of your closest neighbors to alert them of the purloined pooch.

Of course Jessica took much flack for not seeing the writing on the wall — after all, she did see a hungry coyote snatch the little dog with her own eyes — but Jessica lashed out at the haters on
Twitter in a rare angry outburst.

“Still holding out hope despite the a$$holes that say is it a dumb thing to do. Daisy is my baby…why would I stop searching? I’m a mom.”

But alas, even the doggy finding experts failed in their task. After exhausting all possible means, the search as been called off, and you can be sure a devastated Jessica is crying herself to sleep tonight. Awful.