Patrick Swayze will be cremated before a star-studded funeral, according to reports. 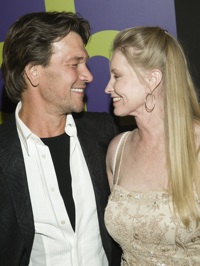 The Patrick Swayze funeral is reportedly being planned
for sometime after the actor’s body is cremated — rumored to happen Friday. Swayze requested his ashes be scattered at his New Mexico ranch, a favorite spot shared with his wife of 34 years, Lisa
Niemi.

“I fell in love with New Mexico when I was shooting Red Dawn,” he told Variety magazine. “It’s my healing place.”

The 57-year-old Dirty Dancing star lost his battle with pancreatic cancer after a 20-month fight. Prior to his death Swayze penned
a memoir due to be published September 29, 2009.

The event could follow the course of the Heath Ledger funeral: a religious ceremony with the ashes present, followed by family and friends
scattering the ashes (in Ledger’s case, into the sea). Alternately, the Swayze family could opt for a memorial service either before or after the scattering of the ashes.

Former costars of Patrick reacted to the news of his death with grief-stricken statements. Whoopi Goldberg said, “Patrick was a really good man, a funny man and one to whom I owe much that I
can’t ever repay. I believe in Ghost‘s message, so he’ll always be near.”

“Patrick was a rare and beautiful combination of raw masculinity and amazing grace,” said his Dirty Dancing costar Jennifer Grey. “Gorgeous and strong, he was a real cowboy with a tender
heart. He was fearless and insisted on always doing his own stunts, so it was not surprising to me that the war he waged on his cancer was so courageous and dignified. When I think of him, I think
of being in his arms when we were kids, dancing, practicing the lift in the freezing lake, having a blast doing this tiny little movie we thought no one would ever see. My heart goes out to his
wife and childhood sweetheart, Lisa Niemi, to his mom, Patsy, and to the rest of their family.”

Meanwhile, Demi Moore shared her thoughts on Twitter. “Patrick you are loved by so many and your light will forever shine in all of our lives…” she wrote. “And in the words of Sam to Molly.
‘It’s amazing Molly. The love inside, you take it with you.’ I love and will miss you Patrick.”