The CW keeps going strong with the premiere of their new series The Beautiful Life. This cross between Make Me a Supermodel and Gossip Girl gives you a raw look into the not always glamorous lives of young fashion models.

Sara Paxton stars as a up and comer with a secret past who gets her big break during Fashion Week when she’s awarded a Zac Posen gown that was supposed to be worn by former top model Sonja
(Mischa Barton) who has just returned to the scene after a mysterious absence. 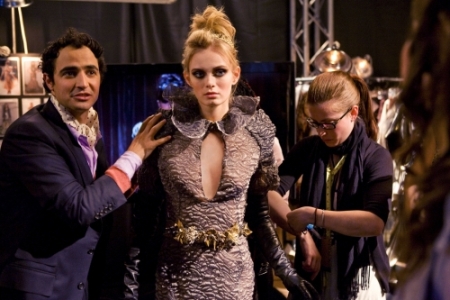 Says executive producer Karey Burke, “What we are doing is a character who is living their life in the spotlight, who is being pounded by the paparazzi, who is at a massive turning point in her
career. Some of these are things that are going on exactly in Mischa’s life and we won’t shy away from it at all.”

The Beautiful Life premieres tonight at 9:00 on The CW, following an all-new episode of America’s Next Top Model.

Tonight my DVR is overflowing to the point where I’m going to need a backup! There are only two shows premiering but there are lots of others that have new episodes and there’s one huge season
finale. Let’s start with the premieres.

Speaking of the runway, Bravo has a new series called Launch My Line and it premieres tonight at 10:00. Think of this one as Dancing with the Stars meets Project Runway.

The ten contestants have always dreamed of having their own fashion line, to bad they don’t work in the fashion industry. One’s a choreographer, another is an architect — experts in their own
fields, they’ll be paired with an actual fashion designer who will help them win $50,000 to launch their own line. I haven’t seen this one, but it smacks of desperation. Bravo, let me give it to
you straight. You lost Project Runway to Lifetime, get over it and move on.

Before you watch any of that, you’ve got to tune in for the huge America’s Got Talent season finale. Shakira, Leona Lewis, Rascal Flatts, Cirque du Soleil and Susan Boyle will all be
performing on tonight’s show. Who is going to take home the million-dollar prize? I’m hoping for those Texas Tenors but it’s anybody’s game. 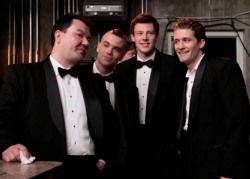 It’s the second round of auditions and you know you’ll see something you’ve never seen before on So You
Think You Can Dance.

Get ready for the Acafellas, an all-male a capella group that has Will so preoccupied, the glee club decides to hire a coach for their own group — more music, more fun, more strange jokes and a
Glee cameo by Josh Groban.

The Beautiful Life: TBL — Pictured (L-R) Zac Posen as himself and Sara Paxton as Raina. Photo: Takashi Seida /The CW

Cat Deeley dishes So You Think You Can Dance