On the America’s Got Talent final, each act hoped they would be singing and dancing their way into earning $1 million. Everyone went that extra mile and the winner might not be any of the most talked about acts. 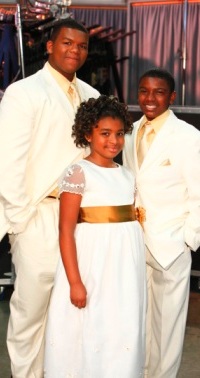 The America’s Got Talent evening began with Voices of Glory. This trio of siblings brought it all
together when they took on Whitney Houston’s Greatest Love of All. Little Nadia began solo then her brothers chimed in and it was as if a full choir was singing behind her. Wait, there was
a choir that came out a little later and I’m not sure why. These three are a powerhouse all on their own and the simple staging couldn’t have been better. I didn’t think it last week, but this
week, I think these kids could win.

Next up was Hairo Torres. I gotta give him credit for wanting to return to his roots as a solo dancer but I think he blew his chance at the win. Instead of his usual comedy dance routine, he went
with a manic, serious number that I believe was meant to express his agonizing need for the Vegas stage — talented guy, but I’d say, he’s out.

Lawrence Beaman took Piers advice and crooned a Barry White tune. You’re the First, My Last, My Everything sounded so smooth and slick and this was definitely the most comfortable we’ve
ever seen him on stage. I didn’t care for the back-up violin girls but halfway through the performance I wasn’t noticing anybody but him. I don’t think he’ll win the million, but I’m sure he’ll be
performing somewhere as soon as this gig is done.

Barbara Padilla had the tough job of topping her own performance and I don’t think that happened. She too returned to her roots, performing the same operatic number she used to audition with.
Gorgeous voice, but the dark dress and severe hair made her look less approachable. I loved the ethereal quality of last week’s performance and we didn’t have that here. I thought she was a lock to
win, but now, I’m not so sure.

The Fab Five put on their 1920’s beachwear for number set to Britney Spears’ Circus. I’m not a big fan of these dancers, sorry. They look too amateurish for me and I thought their
formations when shot from above were sloppy. I don’t expect them to win. 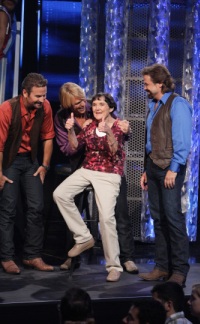 My act of choice, The Texas Tenors, took the stage after the five and they didn’t disappoint. They went old school Vegas with a lounge lizard performance of My Way. I loved every second of
it. I don’t know what it is about these guys that make them so Vegas, but they are — Piers, Sharon and David all agreed. These guys have it. I’d like to see them win, but if they don’t, I imagine
they’ll still be playing in a casino near you real soon — or even The Grand Old Opry.

Drew Stevyns added a small rock combo to his act as he performed I’ll Stand By You. This is another guy that shouldn’t wow me like he does. He’s not the best singer but he simply pulls you
in. Sharon said the only thing wrong with his act was that his pants could be tighter, something she thought of because she’d been “looking at his things all night.” I don’t see him taking the win,
but he should get a record contract or a spot on American Idol.

Grandma Lee was up next and I’m bored with her. Really. She came out on a Cleopatra bed with four shirtless hunks attending, and she had a basketball shoved up her dress. She of course, accused
Piers of being the father, then decided that Simon Cowell would be the new baby daddy. She had a couple of funny jokes, but in general, I
don’t find an angry grandma to be all that funny. And I have the feeling that if she weren’t on primetime, network TV, she’d be cursing up a storm. Please don’t let her win. 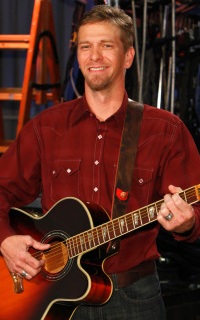 Country singer Kevin Skinner warbled I Don’t Want to Miss a Thing. He was off key in spots and rough but Sharon says that’s what’s so great about him. He is the perfect everyman but I
think the charm has worn off. I don’t think he’ll ever be heard from again after next week.

The final performance was Recycled Percussion, which is ironic since they were the very first act to audition all those months ago. They opened with a crazy drum dual to Wipeout that ended with the
two drummers in a glass box getting rained on! There was something oddly sexy about them both splashing around like a duck in a puddle — very clever, very exciting. These guys could win, but I
don’t think they will. Why? Because they’re good, but they don’t have the emotional pull of Voices of Glory or Barbara Padilla or the charisma of The Texas Tenors.

I guessed last year’s winner, but this year is too close to call.

The season finale of America’s Got Talent airs Wednesday, September 16 from 8:00 to 10:00 and in addition to announcing the winner, they’ll be featuring some amazing guest. Britian’s
Got Talent sensation Susan Boyle will be on hand to perform her new song Wild Horses. Shakira will be shaking it out to She Wolf. Leona Lewis will world premiere her song
Happy, and one of my favorite bands, Rascal Flatts will be singing their latest hit Summer Nights. Not enough?

Read on for more Ameirca’s Got Talent

Reality TV Magazine looks at the America’s Got Talent finals

The AGT group of 12 perform!