Taylor Swift went on The View and said that “(Kayne West) has not personally reached out.” Swift performed and gave a great interview, but the shadow of the Kanye West MTV VMA outburst was ever-present. 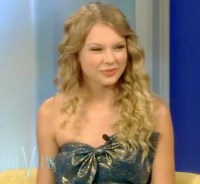 Swift admitted being shaken by the West outburst and spoke for the first time publicly to the ladies of The View.

West leapt onto the Radio City Music Hall stage September 13 and grabbed the microphone from Best Female Video winner Swift. The country crooner seemed at ease about the incident, but did admit she
was a bit taken aback by the outburst.

“I’m not going to say I wasn’t rattled by it, but I had to perform live five minutes later so I had to get myself back to the place where I could perform,” Swift said on The View.

Swift then went out to recount what went through her head from having her name announced to utter bafflement.

“I think my overall thought process was ‘Wow, I can’t believe I won, this is awesome … don’t trip and fall, Oh, Kayne West is here … cool haircut, what are you doing here?'” Swift said. “And
then, ‘Ouch’, and then ‘I guess I’m not going to get to thank fans.'”

For his part as SheKnows first reported, West went on The Jay Leno Show and apologized before performing with Jay-Z and Rihanna.

Swift — why should today be any different? — was bubbly and as warm as ever chatting with The View co-hosts. But, what truly was fascinating to watch was the appearance of Kate Gosselin on the
panel and how star struck she seemed by country superstar Taylor Swift.

Read on for more Kanye-Taylor Swift