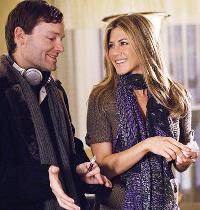 SheKnows: Eloise is also super earthy and tied to nature. Are you like that? Do you garden for instance?

Jennifer Aniston: I do actually. When I lived in Laurel Canyon, my girlfriend Rita, that was one of our favorite things to do was go to a nursery and plant our little garden make
rock gardens and, in my houses, I always have a rose garden or something.

SheKnows: Is that something you added to the character that wasn’t in the script?

Jennifer Aniston: No. It just happened that she was like that.

SheKnows: I guess that’s a simple pleasure that keeps you happy.

Jennifer Aniston: Those little things. It’s that simple, the sort of Zen of having a rose garden and knowing where to pick and then taking them in and placing them; it’s just
something that’s very relaxing.

SheKnows: We heard that you’re learning to play guitar and you’re going to sing in an upcoming movie called The Goree Girls? Are you a good singer?

Jennifer Aniston: I can carry a tune. I don’t know yet. Here’s the good news. The band, this takes place in 1929, they weren’t musicians. They basically created a band in
prison in order to get paroled and so you’re dealing with new singing voices and new instrument playing and somehow they find a way and become a huge phenomenon. It’s a true story.

SheKnows: Have you ever had to do anything musical performing-wise before this?

Jennifer Aniston: I’m trying to think here. I think I sang one little thing in a movie a long, long time ago. No. 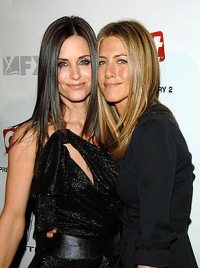 SheKnows: You went to the high school that inspired Fame, right?

SheKnows: So, was there a lot of high school musical stuff when you were going to school?

Jennifer Aniston: There was. I remember auditioning and getting in and not being able to do it because I had to work after school. My mom was into this, ‘You have to work.’ And I
was like, ‘But I want to learn to work and do what I want to do in my life.’ So yeah, I couldn’t do it.

SheKnows: Were there people that discouraged you in early years?

Jennifer Aniston: My one acting teacher, the one Russian, used to say that I was a disgrace to the Russian theater. And I’d be like, ‘Well I’m not in Russia so, if
I’m insulting anyone there, I apologize.’ I don’t remember why he said that. But no, my dad did not want me to do this at all. It wasn’t that he didn’t think I could. He
just thought it was iffy. It’s not quite dependable. You don’t really know if you’re going to make it. I think there’s a part of that that has sort of fueled my drive in a
way.

SheKnows: You have another romantic movie coming out, The Baster. What can you tell us about that?

Jennifer Aniston: It’s about best friends and she decides she doesn’t want to wait for a relationship. She just wants to have a baby but he’s absolutely offended that she does not
choose him to be the donor and she’s telling him how she’s going to go to the donor and he’s gotta be this (or that). She wants to meet the person and he’s just offended that she’s known him for so
long and knows all his quirks and idiosyncrasies and his neuroses but she’s like ‘the DNA is very important in this situation and I basically don’t want to birth you’. But then he gets drunk at a
party and things happen.

Jennifer Aniston: I hope so.

SheKnows: Do you miss anything about television?

SheKnows: Have you had movie experiences that felt like that? 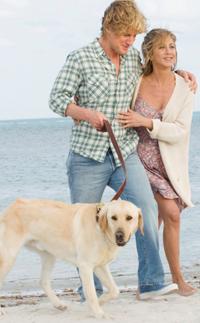 Jennifer
Aniston: It’s different. There’s nothing that’s like that. It’s like the school year and you go on summer vacation and you come back and you’re back at school and you’re a year older but
I’ve had great….like this one (film) we just finished was absolutely a ball and you create a family. Marley and Me was one of my favorite, top experiences.

SheKnows: You still seem passionate about your work.

Jennifer Aniston: I am. If we get lazy with anything, it’s just gonna go away. You’ve got to keep making it interesting and exciting in every area of your life.

SheKnows: What haven’t you accomplished that’s a goal you would like to reach?

Jennifer Aniston: Ooooo. I’ve got to tell you that I don’t really have goals. Things come and I go ‘that would be really interesting’. I’m really interested in the parent/child
relationship like a kind of beautiful Terms of Endearment, an On Golden Pond because I really think that’s our first relationship.

SheKnows: Is your action film The Bounty a kick butt experience for you?

Jennifer Aniston: Oh, it’s so much fun! I was in car chases, gunfights, firing guns, thrown in trunks, drove those caddy carts, or whatever they call those things into lakes, I
hung from buildings. It was just a ball.

SheKnows: Day in and day out, what keeps you excited?

SheKnows exclusive look at Marley & Me