If you have ever lost a relationship that you might have thought would be “forever,” then you can identify with Jennifer Aniston. This pretty, talented and tough young woman has done a fabulous job of making the old saying “success is the best revenge” ring very true. 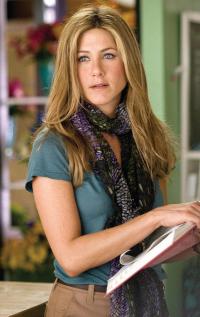 Aniston has a great track record in both TV and film and continues to draw large audiences to her warm, real and quirky personality no
matter what character she inhabits.

Aniston’s latest character in the romantic drama Love Happens, is a relationship-bruised florist named Eloise, a nurturing, earth mother type who has sworn off men until she meets equally
damaged self-help guru Burke Ryan (Aaron Eckhart) who can’t follow his own advice — sparks fly and the two start on the rocky road to couplesville because hey…love just happens.

The two actors, who did not have any on-set or real world romance, did form a mutual admiration society. Eckhart says about his co-star, “Jenn’s such a better actor than I am. She’s so effortless
all the time. (I love) her timing and how playful she is and yet (she) can turn on a dime and just be so thoughtful”.

We wanted to tap into those thoughts so we sat down with Ms. Aniston in Beverly Hills
and got the latest on what she thinks about self-help books, her search for non-formula, more original romances be they comedy or drama, her disastrous first dates, her upcoming films and the fact
that she’d love to do a movie about a mother/child relationship. Picture lovely Jenn in a slinky black crepe jersey top and skirt by Derek Lamb accessorized by gold neck chains, a huge gold watch
and large gold and white disc dangle earrings.

SheKnows: This movie has a lot to say about dealing with grief. Are you looking for movies that have an edge like that, that have something more to offer?

Jennifer Aniston: More to offer, yes. I mean, wouldn’t anybody? I think people want to see that and it’s interesting for us to play that. There’s only so many
ways to tell a romantic story and I think there are a lot of unexplored situations that actually happen in life that people don’t take advantage of. They come up with these crazy kinds of
high concept, formulaic ideas for a romantic comedy. (How do you) keep them apart as long as possible until the end when they can finally stop pretending to be my boyfriend and actually will be my
boyfriend and we fooled everybody. I think I did that one 10 years ago. I think I did that a couple of times.

SheKnows: Do Eloise and Burke actually have to get together at the end of this movie?

Jennifer Aniston: Well, that was a question. There was actually a debate, but then there’s always certain people that want them to get together. You know, they do focus groups which
is always fascinating to me. They bring all these people, as you know, and they basically ask them what they (think) and they’ll have an issue with an ending and creative choice is thrown out
the window. I don’t know.

SheKnows: But, what did you think? It seems to me she serves her purpose in his life. They both get whatever they get out of each other. They don’t need to…

Jennifer Aniston: Right. They don’t need to. I agree with you. But, for The Break-Up, there was a period where they were like ‘They need to get together.’ And, we
were like, ‘It’s called The Break-Up.’ It’s like you can’t get clearer than that. But I think you don’t really know either. It’s like ‘Let’s have dinner
again.’ For all we know, the next day, they had that dinner and it just all went to hell. So, we don’t really know.

SheKnows: Is it frustrating when a focus group audience insists on an ending you really don’t want?

Jennifer Aniston: Oh, yeah, yeah. It’s very frustrating. I know. ‘I didn’t sign up for that’. Yeah, it’s a toughie, isn’t it? But, usually, actually, it is stuff
that will better the film. That’s a rare moment that that happens when you’re like, ‘What?! All of a sudden it’s an alien and not a….’ (Laughs) I mean, it’s not
that extreme. 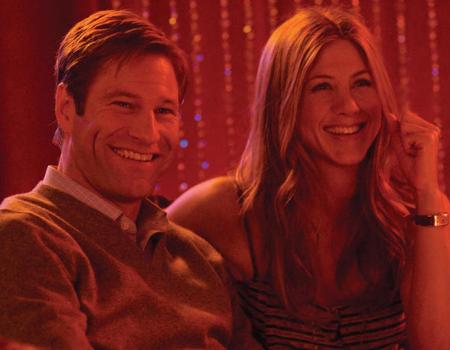 Jennifer Aniston: I’m afraid to say what the truth is. I think you can read (them). There are so many out there. God knows. But there’s always one or two that
you’re like ‘That’s really interesting.’ I think it’s a good thing. I think it’s oversaturated because we’re now feeding on the fact that people are in need of this.
You can’t ask a question without it being analyzed into the ground and I think that’s good for certain things but breathe a little bit. Let life happen to you, you know?

Up next…Aniston dishes on disastrous dates and the constant rumors surrounding her and male co-stars.