Soon after Jay Leno took over for Johnny Carson, Hugh Grant had a run-in with a Hollywood prostitute. The iconic Leno question, “what were you thinking?” made The Tonight Show with
Jay Leno must-see TV and began his long-standing ratings defeat of David Letterman. 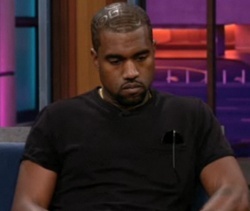 When Jay decided to retire and then
second-guess his decision, Leno could never have imagined that one of his premiere night guests would be the newsmaker who sent the Twitter, 24-hour news networks and entertainment world into a
frenzy the day prior — Kanye West.

West was on Leno’s first show to mark his participation in Jay-Z and Rihanna’s first musical reunion after Umbrella.

Jay’s Run This Town went off without a hitch (check out the performance below), but the talk of the town tomorrow will be Kanye’s mea culpa to Leno.

When Leno asked West about how his mother would have reacted to his VMA outburst, Kanye immediately went quiet. Either he was completely pissed at the question framed with his recently-passed
mother or West was blindsided by the emotion that Leno’s question sparked.

West seemed sincere and truly humbled. As a hip-hop superstar, boisterous and sensitive are both requirements of Kanye the artist.

Kanye the human being received a huge slice of public humble pie when Leno asked him about how his day must have been difficult after he stormed the stage at the VMAs to publicly disagree with the
results of MTV’s Best Female Video.

West’s performance with Jay-Z (whose triumphant The Blueprint 3 is an instant classic — just our two-cents — that must be heard to believed of its brilliance) was meant to showcase
the power of prose from Mr. Beyonce.

With West’s Taylor Swift tirade, the performance could have been overshadowed. Yet it speaks to the presence and power of Jay Z that The Jay Leno Show’s first musical guest proved
prophetic — after all, when it comes to show business talk in Los Angeles, Jay Leno has always sought to Run This Town.