Gossip Girl is back and off to NYU. The CW hit show joins One Tree Hill on a night of soapy premieres. 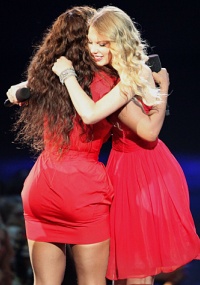 First, Kayne West ruins Taylor Swift’s VMAs moment in the spotlight and then I find out ABC Family canceled Ruby & the Rockits. I’m beginning
to think there’s no place in this world for sweet and wholesome. Okay, so Taylor sings about high school and young love and I get that’s not for everyone, but she’s my absolute favorite singer
right now, so congrats on that VMA award! You go, girl.

Editor’s note: What will be interesting to see is how Kanye West is
on the Jay Leno premiere tonight. Did we mention Rihanna’s there too!

As for Ruby, yes, it’s cutesy and over the top but isn’t there room on TV for a sweet, enjoyable comedy? Come to think of it, if you look at Alexa Vega (who plays Ruby) and Taylor Swift there’s
something very similar about them. Perhaps it’s not so odd that I love them both.

It’s the seventh season premiere of One Tree Hill and again we jump forward in time. It all begins with Nathan’s career in jeopardy, a surprise visit from a sibling and the launch of a new
lines of clothing as well as a movie. Look for some new faces to join the cast as a few of the old standbys are gone for good from the CW
hit.

Season three of Gossip Girl begins with Blair (Leighton Meester) and Chuck (Ed Westwick) still madly in love. Serena (Blake Lively) and Nate (Chace Crawford) both return from their vacations with secrets
and significant others, while Dan (Penn Badgley) and Jenny (Taylor Momsen) have spent the summer learning to live like the rich folk do. 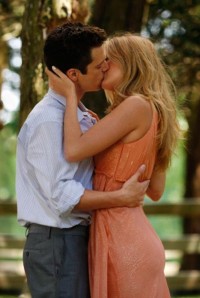 Think any
of these relationships will still be in tact by winter break? I say, not likely. This is Gossip Girl after all!

NBC takes a big chance tonight, moving The Jay Leno Show into primetime where it will air five nights a week. Ads for the show are playing down the talk show element, promoting it as an
hour-long comedy against a see of crime dramas on the other networks.

But will the American public keep coming back night after night? It will be an interesting experiment, that kicks off tonight with special guests Jerry Seinfeld, Rihanna and…Kayne West! It’ll be interesting, that I promise.

Here it is, the final shot for the America’s Got Talent top 10 acts still vying for the
million-dollar prize. You have Kevin Skinner, The Fab Five, The Voices of Glory, Grandma Lee, The Texas Tenors, Recycled Percussion, Hairo Torres, Barbara Padilla, Drew Stevyns and Lawrence Beaman.
A lot of singers in that bunch. Can one of them take it home? My money is on Barbara Padilla.

ABC Family did pick up another season of 10 Things I Hate About You.

The Creative Arts Emmys were given out this weekend. This ceremony is used to present the best guest star awards which went to Justin
Timberlake and Tina Fey for their comedy work on Saturday Night Live. Michael J. Fox won for his role in Rescue Me and Ellen Burstyn took one for her guest shot on Law & Order:
SVU.