Kelly Clarkson told Kanye West — and the rest of the world — just how much of a jerk she thinks he is. 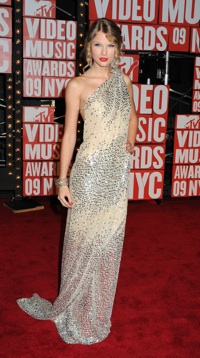 Clarkson took to her blog to express her disgust
over West’s shenanigans at the VMAs. Kanye, being the attention hog that he is, stole the spotlight from Taylor Swift by interrupting
her award acceptance speech with a rude pro-Beyonce rant and was booed the rest of the night.

What happened to you as a child?? Did you not get hugged enough?? Something must have happened to make you this way and I think we’re all just curious as to what would make a grown man go on
national television and make a talented artist, let alone teenager, feel like sh**.

I mean, I’ve seen you do some pretty shitty things, but you just keep amazing me with your tactless, a****le ways. It’s absolutely fascinating how much I don’t like you. I like everyone. I even
like my asshole ex that cheated on me over you which is pretty odd since I don’t even personally know you. The best part of this evening is that you weren’t even up for THIS award and yet you still
have a problem with the outcome. Is winning a moon man that much of a life goal?? You can have mine if it will shut you up. Is it that important, really??

I was actually nominated in the same category that Taylor won and I was excited for her … so why can’t you be?? I’m not even mad at you for being an asshole … I just pity you because you’re a
sad human being.

On a side note, Beyonce has always been a class act and proved again tonight that she still is. Go TEXAS!!

Taylor Swift, you outsell him …that’s why he’s bitter. You know I love your work! Keep it up girl!

And Kelly wasn’t the only one to speak out about Kanye’s ditrbag ways. Twitter is buzzing with celebrity discord:

Pink: Kanye west is the biggest piece of s**t on earth. Quote me. Beyonce is a classy lady.I feel for her, too.Its not her fault at all, and her and taylor did their thing. And
douche bag got kicked out. HA.

Joel Madden: WOW Taylor Swift’s first VMA and she didn’t even get to ENJOY it. Kanye You were just a bully on that one man.

Adam Lambert: Kanye needs to chill. He freaks out every year. It ain’t that deep man.

You know you’re a sad case when even Joe Jackson and Donald Trump wants your career curtailed. Says Joe, “I don’t know what he was
doing. He jumped up on stage and snatched that microphone out of that poor girl’s hand. They should blackball him out of show business for that. He just leapt up there, that was bad. “

And Trump told TMZ Kanye should be totally boycotted “so this kind of thing doesn’t happened again… “He couldn’t care less about Beyonce. It was grandstanding to get attention.”

Read on for more VMA news