Kayne West apologizes to Taylor Swift in light of his MTV VMA outburst. West is in the doghouse and Swift has never been so beloved!

West’s outburst that illustrated his opinion that Swift should not have won Best Female Video and instead should have gone to Beyonce
has pure Kanye. Remember, this is the artist who said he’d never return to MTV because he did not win a Moonman. If he was never coming back, then why was he on stage?

What is truly remarkable is how the sentiment of the world has gone to the young country singer who was excited simply to be invited to the MTV party. “I’m a country singer,”
Swift said. “I’m thrilled to be here.”

Beyonce closed the evening with a VMA moment for the ages. Accepting her Video of the Year award for Single Ladies, Beyonce called Swift back on stage to complete her first
VMA acceptance speech.

Via his blog, Kanye seemed sincere for at least a paragraph, saying, “I’m sooooo sorry to Taylor Swift and her fans and
her mom (Andrea). I spoke to her mother right after and she said the same thing my mother would’ve said. She is very talented! I like the lyrics about being a cheerleader and she’s in
the bleachers! I’m in the wrong for going on stage and taking away from her moment!” 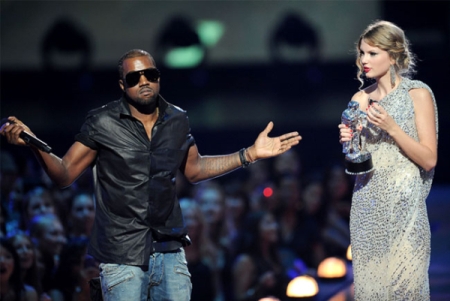 He continued, “Beyonce’s video was the best of this decade!!! I’m sorry to my fans if I let you guys down!!!!! I’m sorry to my friends at MTV. I will apologize to Taylor
2mrw. Welcome to the real world!!!! Everybody wanna booooo me but I’m a fan of real pop culture!!! No disrespect but we watchin’ the show at the cribe right now cause…. Well you
know!!!! I’m still happy for Taylor!!!! Boooyaawww!!!! You are very talented!!!!! I gave my awards to Outkast when they deserved it over me… That’s what it is!!!! I’m not
crazy yall, I’m just real. Sorry for that!!! I really feel bad for Taylor and I’m sincerely sorry!!! Much Respect!!!!!”

Let us know below!