Taylor Swift was enjoying her first MTV Video Music Award moment when the always-outspoken Kanye West decided to demonstrate that he disagreed with the results. Later, Beyonce showed the highest class by handing over the microphone to Swift for her West-interrupted VMA acceptance speech.

Right in the middle of 19-year-old Taylor Swift’s acceptance speech for best female video, Kanye West plucked the microphone from the teen’s hand and told the audience that Beyonce, in fact, had “one of the best videos of all time.” Beyoncé, in the audience, looked bewildered.

The Twittersphere’s response was immediate. Pink, a fellow nominee for best female video, posted on Twitter: “Kanye west is the biggest piece of s**t on earth. Quote me.” And Katy Perry also tweeted, “F**K U KANYE. IT’S LIKE U STEPPED 0N A KITTEN.”

Before Taylor Swift was verbally accosted by Kanye West, the VMAs began with Madonna’s Michael Jackson moment for the ages.

Madonna, one-time friend of the King of Pop, strolled out somberly dressed in black to the microphone and addressed the VMA crowd with her thoughts on Michael Jackson’s death, and how it impacted her and the rest of the world. Eloquent and exquisite, Madonna captured the spirit of the nation in regards to Jackson since his June 25 death.

She then put a human face on the man as the lights went dim and the music video tribute to Michael Jackson commenced.

The rumors were flying as to how MTV would salute Jackson. SheKnows reported September 12 that Janet Jackson would be appearing to sing for her brother. Another rumor that proved to be true is that some of the world’s most renowned choreographers would combine forces to produce a dance salute to Michael’s moves.

In the end, as Madonna walked away the Thriller video began and a crew of professional dancers busted moves mirroring the Michael Jackson videos playing behind them. The world-famous choreographer coming to bring the best for the Michael Jackson MTV Video Music Awards tribute was Jackson himself. His moves were spotlighted with fantastic flair by the dance troupe on stage as various Jackson videos played. 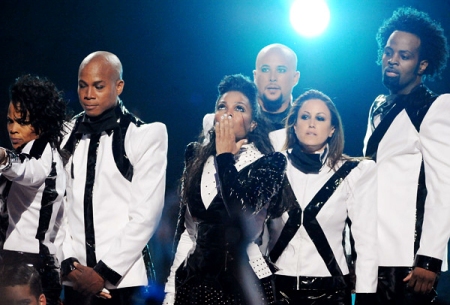 Then, Janet appeared, as predicted. Performing her part of her duet with Michael, Scream, Janet was in synch with her brother on video and we were impressed she was even able to perform so soon after Michael’s funeral.

Katy Perry and Joe Perry of Aerosmith jammed to Queen’s We Will Rock You, which served as the introduction for VMA host Russell Brand. Still audacious, Brand seemed to fall into the background after the Kanye killed his VMA momentum.

Taylor Swift was the VMAs first performer after the West incident. Singing You Belong With Me on the NYC subway is a feat in itself. With the shadow of being 18-years-old after a music industry icon slammed you, SheKnows gives Swift a standing ovation for her resilience. 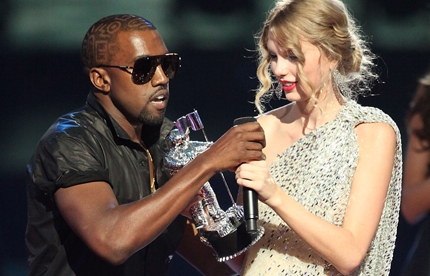 Lady Gaga promised a “spectacle.” Gaga’s performance was somewhat limp, and with the songbird being one of the most anticipated performances, color us disappointed. But…then Green Day saved the day.

The performance from the Bay Area’s finest, Green Day, was electric. Gathering the audience on stage for an almost-manic end of their jam ended with lead vocalist Billie Joe Armstrong crowd-surfing onstage!

Up next…Beyonce does Single Ladies, Muses’ Uprising and the list of winners!