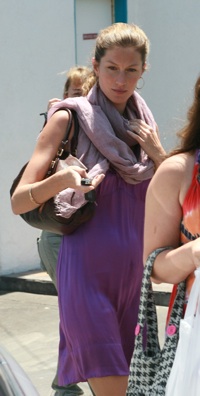 Hubby Tom Brady spilled the beans on the worst-kept secret in
babyland during an ESPN interview with Chris Berman, saying the little one is due in December.

Baby rumors have surrounded the couple for several months, and photogs have snapped several pics of the model’s growing baby bump — when she wasn’t trying to cover it up with a strategically-placed coat or bag.

Tom says he will gladly do all the prep work with Gisele, with one condition. “I told her no Sundays,” he joked. “It couldn’t be harder than training camp, so I’ll be prepared.”

At least the New England Patriots quarterback is smart enough to know who’s the star of this show. He admits that “the women are the ones who have to do the work,” adding “We just have to be there
to support them and so it’ll be nice to do that.”

This of course is quite a different tune than the one he was singing when he left his pregnant girlfriend Bridget Moynahan, who was still so ticked about it months later that she didn’t allow him
in the delivery room. The pot was stirred again earlier this year when Gisele said she considered Moynahan’s son with Brady, John Edward Thomas, to be her own.

No worries, Bridget — soon Gisele will have her own doll to play with.