Related story John Travolta is a Big Fan of Daughter Ella's New Song & It's Such a Sweet, Girl Dad Moment 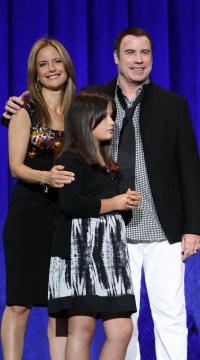 SheKnows was on the scene of the
Disney promotional gathering. Stay tuned for our full report.

There were many highlights including Johnny Depp appearing to announce he will be part of a fourth Pirates of the Caribbean movie.

Yet, the emotional highlight had to be the family Travolta that walked across the D23 stage to support their Disney film, Old Dogs. This was John Travolta’s first public appearance
since the death of his son Jett. Denzel Washington did all of the press for their summer flick, Taking of Pelham 123.

As the Travolta family walked across the stage the crowd welcomed them with a rousing applause that was thunderous in its emotional power. It visibly moved John Travolta, who was also profoundly
proud of his daughter’s acting debut.

As the family left the stage to more thunderous applause, someone in the crowd shouted “We love you.”

Travolta turned towards the crowd and mouthed the words, “I love you too.”

At the Anaheim Convention Center, the Travolta family was made to feel an enormous part of the Disney family. With all this Travolta family has endured in the last year, we at SheKnows are pulling for Old Dogs to be the sleeper hit of the year.

Read on for more Travolta

John Travolta backs out of promo for Pelham 123