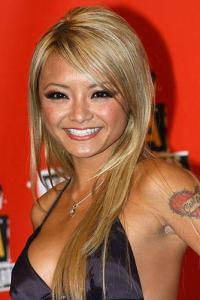 As her rep is releasing statements
(“no one is above the law”), the murky case continues with two incredibly differing stories.

The Chargers training camp in San Diego has been somewhat overshadowed by the controversy with Head Coach Norv Turner saying about the Merriman-Tequila situation, “I don’t think our
team has an after-midnight problem.”

Tequila’s camp is insisting the incident went the way of the criminal and
less mercy, as Merriman is reporting.

It’s been less than a week since Tequila said her boyfriend, Merriman, choked her. Police were called to the Merriman San Diego home on September 5 to discover the reality TV star with
bruises on her arms.

Merriman said that he was restraining Tequila to keep her from driving drunk late at night. Tequila, on the other hand, said she is allergic to alcohol and doesn’t drink.

Dumanis said in a statement September 11, “After a thorough review of the investigation into the Sept. 5, 2009 incident at the Poway home of Shawne Merriman, our office has determine there is
insufficient evidence to prove beyond a reasonable doubt that any crime was committed,” DA Dumanis said. “This case is now closed. No further comment will be made.”

Since Tequila believes that justice has not been served, she has filed a civil suit against the San Diego Chargers lineman.

In a statement obtained by TMZ, Tequila’s representative said that they are far from finished with this case.

“The San Diego District Attorney’s decision not to press charges against Shawne Merriman for the battering of Tila Tequila demonstrates an unconscionable negligence in the discharging of their public duties. We strongly
feel that justice has not been served in this matter,” the statement read.

“Obviously, The San Diego Charger’s NFL franchise brings millions of dollars in revenue to the city of San Diego, and it seems clear that other interests are being served by the DA’s office than
the upholding of the law. A young woman was violently beaten and choked, and the physical evidence is both overwhelming and disturbing,” Tequila’s rep continued.

“Tila’s account of the events has remained consistent from the beginning, while Merriman’s story has changed repeatedly. Just because the DA has made this reckless decision doesn’t mean that
justice will not be served in this case. No one is above the law. Tila Tequila will immediately begin pursuing civil charges against Mr. Merriman and she will have her day in court.”

SheKnows talks to Tila Tequila at the MTV Movie Awards