These were the hottest news stories for the week of September 11, 2009. 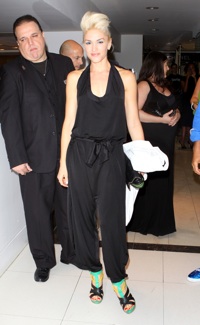 Mom of two Gwen Stefani looks sleek and stylish in this black halter-neck jump suit, brightened up with shocks of aqua on her shoes and eyes, during New York Fashion Week.

Much to-do about nothing? Ellen DeGeneres broke the news on her own show that she would be joining the judges panel on American Idol this
season, effectively replacing Paula Abdul. Ellen expressed concern that Paula would flip her lid over the casting during an interview on Ryan Seacrest’s radio show, but Paula has taken the high road and wishes Ellen nothing but success.

Socialite, designer and rock royalty princess Nicole Richie gave birth to her second child with Good Charlotte frontman Joel Madden. Not to
be outdone in the atrocious baby name department by fellow music aristocracy Ashlee Simpson and Pete Wentz — who named their poor little prince Bronx Mogli — Nicole and Madden made sure their boy
will be the most swashbuckling pirate on the block with the name Sparrow James Midnight.

Jon and Kate plus hate

Jon Gosselin gave Good Morning America a soundbite that is sure to rocket his kids straight to the therapist’s office, telling the news show that he despises Kate, the mother of those eight kids. Jon, who has also been seen making out with 20-something party girls and galavanting around Vegas
clad in head-to-toe Ed Hardy, also accuses Kate of stealing his wedding ring. He later threw his sucker in the dirt and held his breath until he got his way. Meanwhile, Kathy Griffin parodied the pair perfectly.