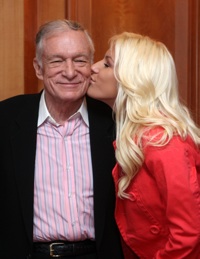 Forgot about her, didn’t you? Can’t say we blame you; after
all, Hugh spent five seasons of his show The Girls Next Door cavorting with three bubbly blonde live-in girlfriends.

But the real “girl next door” is his estranged wife, Kimberly Conrad, who lived in the house adjacent to the Playboy mansion with the couple’s two sons since their separation 11 years ago.

That is, until Hef sold the house from under her earlier this year — for a cool $18 million. Hell hath no fury — you know the rest — and Kimberly sued Hef for $5 million. Hef
fired back with divorce papers.

Kimberly, a former Playboy Playmate, has been living on Hef’s dime since they separated in 1998. The couple’s children are in college and Hef has pledged to pay their educational expenses. In
addition, he is asking the court to set spousal support at $20,000 — Hef himself pulls in a hefty $290,000 a month in various income himself.

Hefner says he wants to pay Kimberly comparatively little because he’s shelled out close to $12 million since they separated.

The 83-year-old hero to all men is keeping his spirits up with a pair of twin models, Karissa and Kristina Shannon, and brunette beauty Dasha Astafieva. His former and ever-popular bevvy of blond
girlfriends, featured on The Girls Next Door, have moved on from the Playboy life: Kendra Wilkinson married and is expecting her
first child, Bridget Marquardt has her own show Bridget’s Sexiest
Beaches and Holly Madison is currently appearing in Jerry
Mitchell’s Peepshow in Las Vegas after a not-so-successful run in Dancing with the Stars.