Michael Jackson has been laid to rest two months after his death. 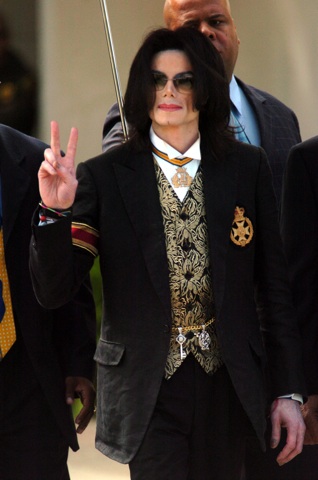 The service started nearly an hour and a half late due to the family’s unexplained tardiness. Guests, including 77-year-old Taylor, waited on lawn seats in 90 degree temperatures at sunset with the
smell of smoke from LA-area wildfires lingering in the air.

Jackson’s casket was surrounded by two large portraits the performer as a young, smiling ma. The coffin was covered in white lilies and roses and topped with a crown. Insiders say Michael’s three
children each wrote special notes to be slipped into their father’s casket.

The hour-and-a-half long service included speeches by several friends of the Jackson family, who recalled Michael’s sense of humor. Rev Al Sharpton gave a eulogy after the tributes; Gladys Knight
then sang the hymn Our Father as Jackson’s brothers carried his casket into the private Glendale mausoleum.

An attendee (who requested anonymity due to the sensitivity of the affair) said Katherine Jackson appeared emotionally exhausted after the service and had to be helped to the car after being
overcome while following the procession into the mausoleum. Michael’s daughter Paris, 10, cried as the casket was carried to its final resting place, but the children were otherwise composed during
the service.

Jackson will rest in good company: his tomb lays among those of such luminaries as Clark Gable, Jean Harlow and WC Fields. The mausoleum is private and open to family members only. Jackson’s estate
purchased 12 burial spaces at Forest Lawn, according to court documents.

Jackson died June 25 after being injected with the powerful anesthetic propofol by his personal physician Dr Conrad Murray, who is now
under investigation for homicide.