The SheKnows Fall TV preview begins with our look at the CW. From returning favorites Gossip Girl, America’s Next Top Model, One Tree Hill to premieres Vampire Diairies and Melrose Place — the CW is scorching. 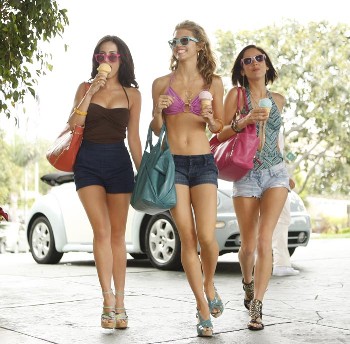 SheKnows TV writer Cynthia Boris and yours truly dive into each network’s cooler season offerings over the next two weeks.
Stay tuned!

First, the CW is using a successful combination that worked for another network in another decade. The CW starts off the Fall TV preview with two classics that prove everything old is new again —
90210 and Melrose Place.

It’s Junior year for the West Beverly gang of 90210. Look for more self discovery stories as the crew learns life lessons from SATs to STDs (this is 90210 after all!).

90210 found an audience of Beverly Hills, 90210 fans and an entire legion of new viewers who tuned in by the millions for this very new Millennium take on life as a teenager in a
world shadowed by Hollywood and extreme wealth.

Naomi, Adrianna, Silver, Annie, Dixon, Navid and Liam all find new trials, tribulations and terrible amounts of trouble in a good way in season two. These stories could only happen in LA…and only
on 90210.

Another famous address in Los Angeles is returning to television. As 90210 found success on the CW last year, the network hopes for the same with a thoroughly modern version of the
‘90s soapy classic. There are a few familiar faces including Laura Leighton and Thomas Calabro, but the cast of young upstarts is what is generating the serious buzz this fall. Leading the
pack is Ashlee Simpson Wentz. 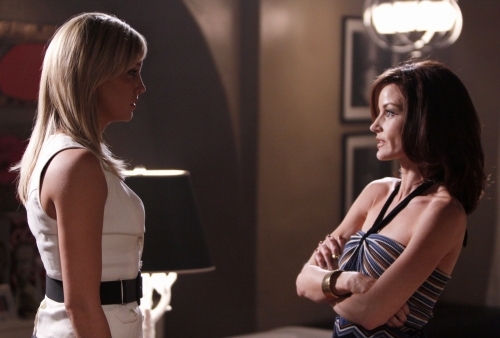 No one could sum up the soapy beginnings of a new Melrose Place as the network behind it. A synopsis courtesy of the CW:

In an elegant Spanish-style apartment building in the trendy Melrose neighborhood of Los Angeles, a diverse group of 20-somethings have formed a close-knit surrogate family. Sydney Andrews is the
landlady, still beautiful at 40 and a central figure in the lives of all her tenants, especially handsome and rebellious David Breck (Shaun Sipos, Shark).

Sydney started an affair with David despite her turbulent history with his estranged father, Dr. Michael Mancini (Calabro). Both father and son learned through experience that Sydney was not above
using blackmail to control people. Another tenant, high-powered publicist Ella Simms (Katie Cassidy, Supernatural), once considered Sydney her mentor, but their friendship was destroyed by
betrayal, and Sydney threatened to evict Ella and ruin her career.

Sydney also played a pivotal role in the career of Auggie Kirkpatrick (Colin Egglesfield, All My Children). After they met at an AA meeting, she became Auggie’s sponsor and
encouraged his dream to become a chef. Now a successful sous chef at the trendy restaurant Coal, Auggie has been avoiding Sydney since she began drinking again. 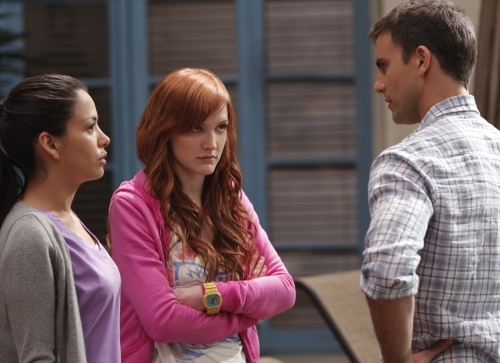 The other tenants include Lauren Yung (Stephanie Jacobsen, Terminator: The Sarah Connor Chronicles), a medical student in desperate need of money to pay her student loans, and Jonah Miller
(Michael Rady, Swingtown), an aspiring filmmaker who has just proposed to his live-in girlfriend Riley Richmond (Jessica Lucas, Cloverfield), a first-grade teacher.

The newest tenant, 18-year-old Violet Foster (Simpson-Wentz), has just arrived in LA with her own secret connection to Sydney. When a bloody body is found floating in the courtyard pool, David is
the leading suspect. However, as the police are soon to discover, almost everyone living at Melrose Place had a reason to want the deceased out of the way.

Got all that? If that premiere summary doesn’t wet your appetite for another round of Melrose magic, our upcoming September 7 review will certainly achieve that feat!

Short women, unite! This time around America’s Next Top Model is all about the girls who are
5-foot 7-inches and under.

Fourteen lovely ladies have made it through the audition process and now they’ll begin competing for the ultimate prize — a contract with Wilhelmina Models and the career of their dreams. This
cycle will also have some celebrity judges including Kim Kardashian, Lauren Conrad and fashion icon Chanel Iman.

Picking up exactly where last season left off, the Winchester brothers, Sam (Jared Padalecki) and Dean (Jensen Ackles), are about to meet the biggest bad of them all. Lucifer is rising, but it’s
not going to be all doom and gloom. Creator Eric Kripke says this is going to be the “fun apocalypse.”

He also says this will be the season where Sam and Dean are reunited as brothers on a quest but they’re going to have to slog through some real misery before they get there. A half dozen familiar
characters will be returning for the new season and you won’t want to miss the fifth episode of Supernatural, which features Paris
Hilton playing a slightly more demonic version of herself.

Supernatural up to speed: