These were the hottest entertainment news stories for the week ending in August 21, 2009. 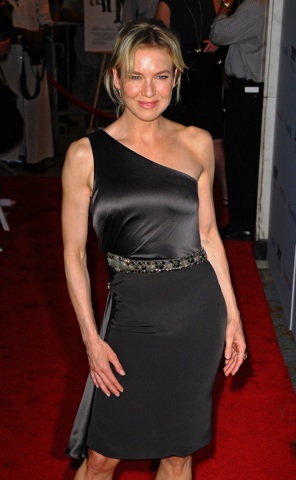 Renee Zellweger brought a dose of glam to classic simplicity in this black one-shouldered cocktail dress worn at the premiere of her new film My One and Only. Contrasting fabric textures,
a sparkly belt and a trailing sash make this look a winner. Check out her hairstyle here.

McSteamy and wife caught on tape

Eric Dane and wife Rebecca Gayheart were caught with their pants down when a video surfaced showing the married couple cavorting with a gal
pal buck naked. The leaked three-minute clip of a longer tape showed Rebecca and friend Kari Ann Peniche playing in a bathtub together, Eric passing the camera off to his wife and Rebecca talking
about how high she is. We may not get to see all of Grey’s Anatomy, but we sure did see all of McSteamy’s.

Continuing her “I’m not crazy anymore, I swear” publicity tour, Britney Spears made a surprise appearance on Late Night with David Letterman in a skimpy black bikini to present the Top 10
list: Top 10 Ways the Country Would Be Different if Britney Spears Were President. Not mentioned were healthcare options for the mentally
ill and protecting one’s assets from greedy parents.

You know you’ve hit the big time when you have your very own celebrity stalker. Miley Cyrus caught and sent hers to jail this week: a 58-year-old man who claims he is engaged to the 16-year-old Disney star.