Eric Dane and wife Rebecca Gayheart are embroiled in a legal battle over a video that shows the couple cavorting naked with a pal. 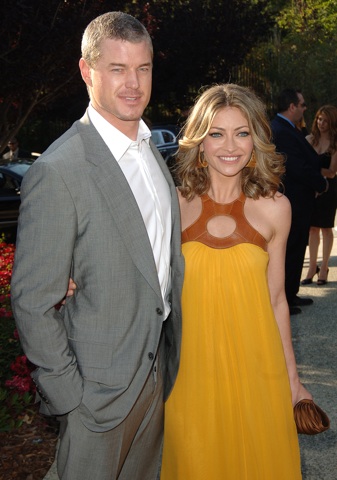 The
Grey’s Anatomy star shows his goods on screen while he and 90210 alum Gayheart take turns filming
their playtime with pal Kari Ann Peniche, who happens to be a dethroned beauty queen, Hollywood madam and the ex-fiance of Aaron Carter.

The tape shows the couple letting it all hang out in Peniche’s SoCal apartment, with the girls playing dress up in skimpy lingerie and soaking in the tub together. All three appear to be under the
influence; at one point Gayheart says she needs to lie down because she’s “so high.”

It is not a sex tape, per se — no overt sexual acts take place on the video. Says Marty Singer, a lawyer for Dane and Gayheart, “From what I’ve seen it’s a naked tape, not a sex tape.” Singer
added, “At most it’s three people maybe wanting to have sex.”

Kari is blaming the video leak on troubled country star Mindy McCready, who was her roommate on Celebrity Rehab. Kari claims Mindy stole the video off her computer hard drive after
the two argued over money. Kari filed a stolen property report with the LAPD.

Dane, Gayheart and Peniche had a formal sit-down with McCready and lawyers negotiating over the terms of the stolen hard drive property. Dane was given full legal rights to the tape — but someone
gave Gawker.com a three-minute clip.

Dane is not a happy camper and says he will sue the pants off anyone who publishes the video.