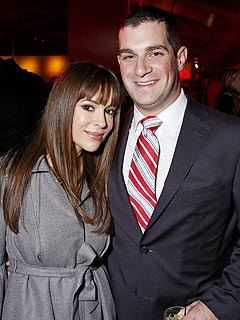 The Charmed actress wore a custom Vera Wang gown and carried a bouquet of lilies of the valley down an aisle strewn with cream rose petals, while John Lennon’s Imagine played in the background.

The traditional vows were exchanged outdoors under an iron gazebo in the backyard of Bugliari’s New Jersey estate.

“We wanted a wedding that was reflective of who we are as a couple,” said Milano.

“My Italian family still eats Sunday dinner together every week,” says Milano. “We wanted to capture the same feeling with people passing around beautiful bowls of food and talking and laughing.”

Dinner was served family style in a tent with farmhouse tables, rustic wood flooring and iron chandeliers — a reception theme designed by event planner to the stars Colin Cowie.

No word on whether or not Who’s the Boss costars Tony Danza or Judith Light were in attendance, but at least one celeb was there — Bradley Cooper, sans rumored flings Jennifer Aniston or Renee Zellweger

Milano and Bugliari met in 2006. He proposed to Alyssa last December with a custom-designed ring. Her latest project? ABC’s Romantically Challenged, which was just picked up for the 2009/2010 season.