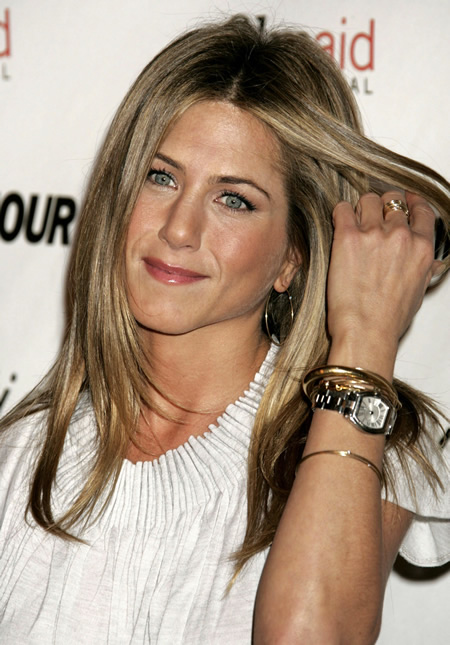 Jennifer Aniston in the spotlight

Jennifer Aniston was born into a show biz family. Dad John Aniston has appeared on soap operas almost nonstop since 1975 and has played the ever-popular Victor Kiriakis on Days of Our Lives since 1985. After attending New York’s Fiorello H LaGuardia High School of Music & Art and Performing Arts — better known as the high school in Fame — she cut her acting chops off-Broadway until she made the move to Los Angeles in 1989.

Small television roles in short-lived series such as Molloy, Ferris Bueller, The Edge and Muddling Through quickly followed, along with guest-starring roles in Quantum Leap, Herman’s Head and Burke’s Law. After making her film debut in the horror flick Leprechaun, Aniston finally got the big break that would make her a household name.

Friends debuted in 1994, and with it the style phenomena of The Rachel — the shaggy, layered hairstyle Aniston sported for several seasons. The show quickly became the biggest hit of the decade, and Aniston became a household name. During the last two seasons, Aniston pulled in $1 million per episode, making her and her female costars the highest-paid actresses on TV. She also garnered critical success in the role, winning a Golden Globe, a Primetime Emmy and a Screen Actor’s Guild Award.

Jennifer has successfully made the leap from TV to film with 21 movies under her belt — and many more to come.

The girl next door became a tabloid favorite when she married fellow actor Brad Pitt in a lavish Malibu wedding in 2000, but the attention really heated up when the couple announced their split in 2005. Rumors of Pitt’s infidelity with now-partner Angelina Jolie cast Jennifer in the scorned-wife role that she’s had a hard time shaking, despite a thriving love life.

Besides her active film career — her next flick is Love Happens costarring Aaron Eckhart — Jennifer is an avid supporter of multiple charities, including Friends of El Faro (which raises money for an orphanage in

Mexico), St. Jude’s Children’s Research Hospital, Stand Up to Cancer and the “It Can’t Wait” campaign to free Burma. In 2007, Jennifer won GLAAD’s Vanguard Award for her contributions to broadening the understanding of the gay, lesbian, bisexual and transgender community.

What’s next for Jennifer? She has four films in the ready for 2010, including The Baster, The Bounty, Pumas and The Goree Girls. Her latest, Love Happens, is set for a September 2009 release.

SEE photos of Jennifer Aniston through the years