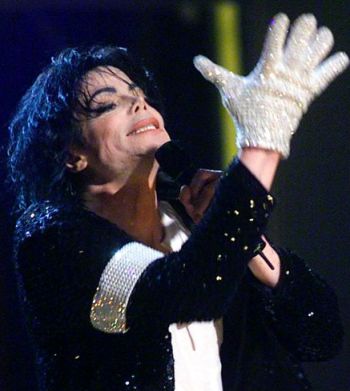 When you think of Michael Jackson’s best-selling album, Thriller, what do you think of? A moonwalk of course and ah yes, a glove. Well, the famous glittery
glove from 1983 will be up for auction.

Here’s the scoop: this left-handed glove was worn by Jackson on Motown’s 25th anniversary TV special. It was originally store bought and then covered with a cluster of rhinestones.

On November 21 at the Music Icons auction at the Hard Rock Cafe in Times Square, Michael Jackson’s famous glove will be auctioned
with other unique rock ‘n roll memorabilia like unreleased Jimi Hendrix lyrics.

A founding member of the Commodores, Walter “Clyde” Orange, has had the glove since ’83 when Jackson gave it to him. Clyde became familiar with the King of Pop when his group
toured with the Jackson 5 in the ’70s. When he asked MJ for an autograph, he would always refuse by saying Clyde was more famous of the two of them. In turn, the autograph request became a private
joke.

Fast forward to March 1983: the Motown special was taped and Michael Jackson sang with Clyde’s brothers. He simply dazzled on stage with Billie Jean, moonwalk and all. Yet again,
Clyde asked him for an autograph backstage and instead, MJ did the next best (or perhaps even better) thing: he gave him the glove.

After his death, Clyde decided to put the glove up for auction. In an interview he stated, “The world should see this. This is the first. That’s the song that made him shoot through the
roof as a superstar.” Proceeds from the sale will benefit MusiCares, an organization that helps musicians who are struggling with substance abuse.