E! is about to launch their newest show, Kourtney and Khloe Take Miami and from the sneak peak we saw we think it will be a huge hit. 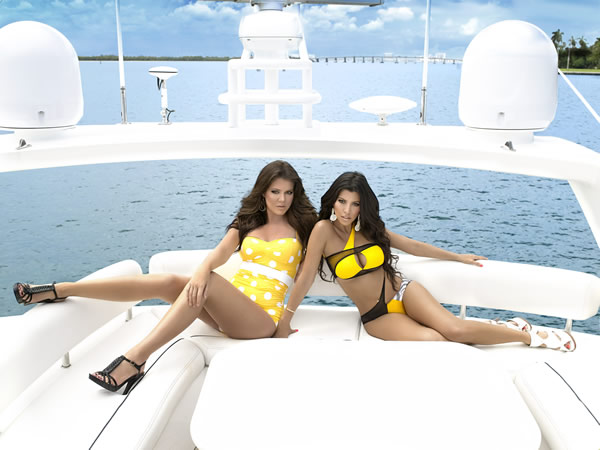 If you like the show Keeping Up With The Kardashians you will really enjoy Kourtney and Khloe Take Miami. The story behind the show is that Kourtney and Khloe have moved to
Miami for the summer to not only enjoy the beach, but to open their second DASH store.

The sisters are excited to be in Miami and can’t wait for their grand opening. However, they are also spoiled and head off to pick up their new cars first. While at the dealership sister
Kim calls and wonders what Khloe and Kourtney are doing since they are supposed to be there to set up a store. There is the promise of a lot of drama between the sisters as both Khloe and Kim
think the other does nothing for the business. The first big fight occurs in the limo right after leaving the airport, “first” being the operative word.

On air with Khloe

The show also highlights Khloe’s “dream job” of having a radio show. We got to meet Terrance who is Khloe’s co-host and watch as she nervously sets up the show. Of course being told that
she can’t use foul language on the air is a little shocking to Khloe. During the first broadcast there is a sex toy expert brought in for an interview which Khloe claims is “right up her
alley”. Following the first live broadcast Khloe and Terrance head out to celebrate which leads to them getting a little too close for comfort…

The first episode of Kourtney and Khloe Take Miami is filled with drama, sex and sibling rivalry. The previews of the season to come promises to be full of half naked men and women,
fun in the sun, more drama and definitely more sex. How did the opening of DASH go? Did Khloe and Kim get over their spat and work together to make the store a success? What really
happened between Khloe and Terrance and where does it leave their working relationship? If you want to know all that you will have to tune into the first episode which airs this Sunday at
10/9C on E! We do not think you will be disappointed.