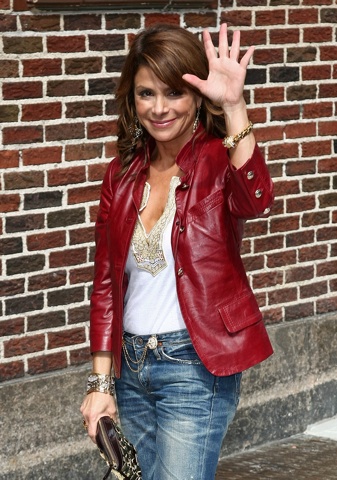 The often-addled
third judge has been locked in tense contract negotiations with American Idol producers and has finally cried
“uncle.” Abdul announced the news via Twitter, writing, “With sadness in my heart, I’ve decided not to return to Idol.
I’ll miss nurturing all the new talent, but most of all being a part of a show that I helped from day1 become an international phenomenon.”

“What I want to say most, is how much I appreciate the undying support and enormous love that you have showered upon me.”

Abdul is said to have fiercely objected to her $2 million contract after show host and new media kingpin Ryan
Seacrest inked a $45 million deal for himself. Simon Cowell’s piece of the pie is said to be hovering somewhere around $100 million. Sources say Paula’s original asking price of $20
million was lowered to $12 million in recent days in a desperate bid to stay onboard.

Not helping matters: Kara DioGuardi signed on for the ninth season of
the show in the judge’s chair merely days ago — where she was the fourth wheel last season. She will now be sitting in Paula’s seat for an as-of-yet undisclosed fee — but you can
bet your bottom dollar that it’s far less than $12 million.

Paula’s rep spoke out against the evil corporate ne’er-do-wells earlier this week, telling the LA Times, “Very sadly, it does not appear that she’s going to be back on
Idol. I find it under these circumstances particularly unusual; I think unnecessarily hurtful. I find it kind of unconscionable and certainly rude and disrespectful that they haven’t
stepped up and said what they want to do. She’s not a happy camper as a result of what’s going on. She’s hurt. She’s angry. I think at this point we’re going to be
considering everything, including some kind of a competition show. She has tremendous ideas for a whole variety of shows.”

Fox, FremantleMedia North America and 19 Entertainment issued a joint statement to Extra on the matter: “Paula Abdul has been an important part of the American Idol family over
the last eight seasons and we are saddened that she has decided not to return to the show. While Paula will not be continuing with us, she’s a tremendous talent and we wish her the best.”

Take heart, fans. This will give Paula lots of time to not drink and not take painkillers and not be completely and utterly insane, which
contrary to all evidence otherwise is exactly how she says she spends her free time.

Read on for more Idol

Reality TV Magazine asks: how much is everyone on American Idol
making?