We’ve got your sneak preview from “Resistance” — the eagerly-awaited new album from Muse, one of rock music’s most multi-talented trios (and one of SheKnows’ favorites). Hear some songs, see the brand-new cover art, and get the album track listing right here! 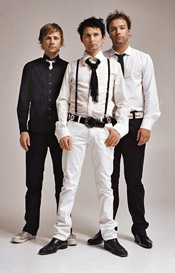 The band you can’t get enough is back and ready to rock the world!After the United States of Eurasia leaked onto the internet (see the video on the next page!), the band that provided the mental soundtrack for Stephenie Meyer’s Twilight Saga, has returned with more melodic power music that is all but impossible to resist.

Whether it’s Supermassive Black Hole (as featured in the film version of Twilight in that awesome baseball scene), Starlight, Knights of Cydonia, Take a Bow or Stockholm Syndrome or many other singles and album-tracks , Muse is the master of the ever-building musical menagerie that leaves you frozen, mesmerized and forever yearning for more.

Uprising is the perfect first single from The Resistance for the band known for bringing their audience to their feet on more than a few — more like a few dozen — occasions.

BBC Radio One’s Zane Lowe has premiered the new Muse single, Uprising, and you can hear it here!

“They were right there from the beginning,” Meyer said. “I’m so thrilled they made it into the movie.”

Next page… the cover art for Resistance, the new Muse album track listing and a look at Muse’s United States of Eurasia!