Michael Jackson’s 79-year-old mother, Katherine, will get custody of his three children. As per the mother of his oldest children, Debbie Rowe? She will get visitation rights but no additional money. 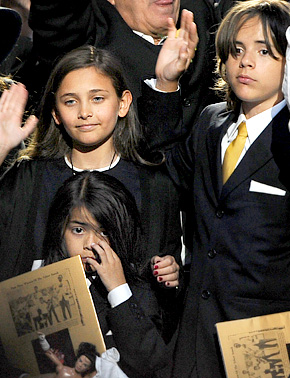 Reports have
not revealed specific details but rest assured, Katherine’s attorney has stated it’s an agreement for the best interests of the children. He was quoted as saying, “This is not a
money deal. This is not about money.”

Since June 25, it has been questionable as to who would raise his children, Prince, 12, Paris, 11 and Blanket, 7. NBC reported that Rowe has agreed not to claim custody and she will not receive any
additional money while she retains her parental rights to her children. As such, Prince and Paris are aware that Debbie is their mother and as such, they will commence having a relationship with
her.

In fact, the process will be closely supervised by a child psychologist.

Again, Katherine’s attorney reiterated the decision is best for all of the children in terms of being raised by Katherine Jackson.
And if you’re wondering what the role is of Joe Jackson in all of this? Sure, he’s her husband but he’s not living in Los Angeles. Sounds like he’s pretty much out of the
child rearing picture based on that statement.

Anyway, while the will indicated his mother will raise his three children, his two longtime business partners will look after his money. His mother will apparently receive forty percent of the
estate.