If American Idol doesn’t give Paula Abdul the money she’s asking, will she really walk away? 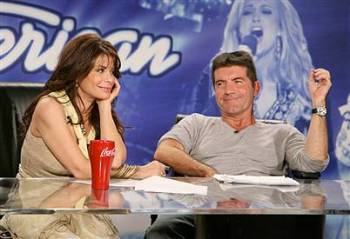 In the say it ain’t so category, unfortunately we must report that Paula Abdul will most likely not return to American Idol after eight solid seasons on the air.

Paula’s manager says, “It does not appear that she’s going to be back on Idol.” Here’s why: Paula hasn’t yet received a proposal to return, and
that seems a bit odd. After all, Ryan Seacrest and Simon Cowell have already received their deals — and to the tune of a pretty penny.

Although Simon has indicated he doesn’t have a whole lot of pull, he’s telling fans that she’ll be back. He has made it clear he wants Paula on the show, as does Ryan. Simon’s
already been so bold to tell the show Extra that he hopes everyone will be back on American Idol next season, including Paula Abdul. “I think — as far as I know — you’ll see everybody back. I hope
so.”

Here’s the thing: If you were among the producers of American Idol, why wouldn’t you want Paula back? She’s a staple of the show.

In other American Idol news, the official website has posted photo galleries of auditions for, yes, Season 9 already!

All we know is, here at SheKnows, we’re pulling for Paula to be back on Idol.