Laura Leighton is bringing back Melrose Place, but first audiences get to treasure the actresses’ return in the Hallmark original film, Mending Fences. 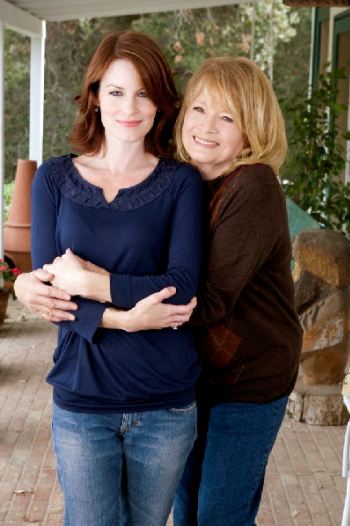 Mending Fences pairs Leighton with legendary Angie Dickinson in the story of a small town mother (Dickinson) whose
daughter (Leighton) moves back home with her own daughter. The quiet of rural life is short for Leighton’s character as a battle is brewing in this small town.

Leighton first burst onto the pop culture scene on the early ’90s primetime soap, Melrose Place. Leighton is back at the famous locale as the CW is rebooting the series with some
veterans such as her character Sydney Andrews making the comeback, along with new faces for Melrose including Ashlee Simpson.

After the original Melrose Place left the air in 1999, Leighton and co-star husband Doug Savant had two children and Leighton
spent time at home with the kids while Savant conquered the Desperate Housewives.

The actress has fit in a few television movies since then, including a 2008 film on the Hallmark Channel, and has now emerged as a working mom with a television movie and a hit show’s return
– it appears the time is now for Laura Leighton.

Laura Leighton: Yeah, I think so.

SheKnows: With all that going on in your life, you have to take that time now. 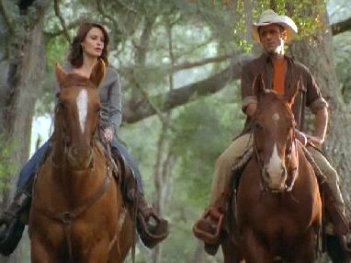 Laura Leighton: Yes, I got a little bit going on (laughs).

SheKnows: Yeah, you do.

SheKnows: After having your kids and starting a family, what was it that made you want to come back in this way as we have you in a Hallmark movie and the return of Melrose Place?

Laura Leighton: I never intended to leave the business completely. I just took some time to be with my kids while they were little and all that. Doing little movies here and there
has been the perfect way to keep something while not taking too much time away from my family.

SheKnows: What was it about Mending Fences that caught your eye?

Laura Leighton: I’ve enjoyed doing movies with Hallmark. I appreciate their value of a good wholesome story. I like the simplicity of it and the humanity of it.

SheKnows: Filming a Hallmark movie, many actresses have said that it is a real joy. It is a get away from it all kind of filming environment where they often send you to Montana.

Laura Leighton: Mending Fences we filmed in town (Los Angeles). It was local so I was still at home and still commuting to the set every day. It was the best of both
worlds.

SheKnows: That’s nice. You have that with the new Melrose Place too.

SheKnows: Yeah, that’s true, as an ensemble you don’t have to be on set 12 hours a day.

Laura Leighton: Right…it’s not every day. It’s perfect for a mom. 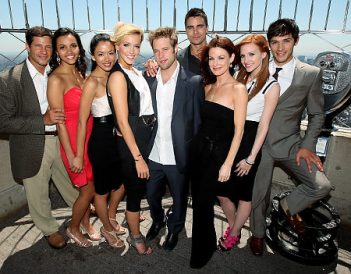 SheKnows: It is surreal, for lack of a better word, to be on a Melrose set? You look around and it looks the same,
but when you look around — it’s new faces.

Laura Leighton: It is a little bit surreal. I never could have anticipated finding myself back playing that same character after time had passed. It is sort of surreal and cool.

SheKnows: There’s a lot of buzz about Ashlee Simpson’s casting as she pushes into acting. How you had a chance to share scenes with her?

Laura Leighton: We haven’t had any scenes together, but we certainly hope so. I imagine we will. She’s been sweet and enthusiastic. The whole cast really is excited
about the show.

SheKnows: Speaking of actresses, you worked with a legend. How was working alongside Angie Dickinson on Mending Fences?

Laura Leighton: She’s a complete professional. It’s really admirable to see her doing the work and being a pro. Her first day on the set, she had a tough scene. She was
shooting with a stunt double and we had rain machines. She had to spend the entire evening until the wee hours of the morning wet in the woods. She was a total sport. She’s great and
beautiful.

SheKnows: For you, the Melrose Place fall premiere on the schedule. Is there anything else coming up like a children’s book, perhaps? It seems
with your story, you could write one.

Laura Leighton: A children’s book would be fun (laughs). I have nothing specific to speak of, always working on what’s next. I am looking forward to
Melrose Place!

Mending Fences airs July 11 at 9 pm on Hallmark and Melrose Place returns to prominence once again on the CW in the fall.

SheKnows sits down with Ashlee Simpson